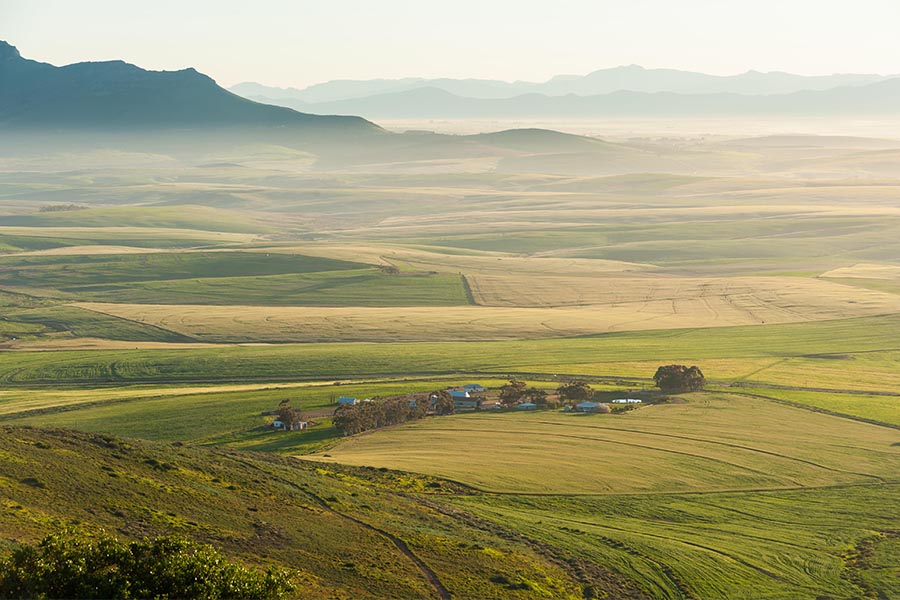 “In Koringberg it’s not about what we have – it’s about what we don’t have: petrol pumps, traffic, busy shops, banks, noisy vehicles and car guards. What we do have, is open farm roads and wheat fields. We enjoy the stars and a lekker South African braai.” Maryke Roberts found the invitation from Vleidam Guestfarm in the Swartland irresistible.

The property is all-farm. There are animals, dams, hiking paths and four cute self-catering cottages surrounded by wheat fields – all within just 1km from the village should you want to pop out to the cash store for a bag of sweets.

Even the drive up the N7 to Koringberg is a pleasure. The Swartland is a quilt of many colours that seasons spend the whole year sewing. In summer, nature crafts the thick and heavy black wool of renosterveld until it’s replaced by rich, dark browns and the mint-green of the first buds of wheat that appear in tilled soil. In spring, bright yellow and emerald take over as the canola blooms full, and in the late summer colours fade as the wheat ripens, blades dancing graciously dance in the afternoon breezes.

I find John and Nikki Loxton of Vleidam waiting beside one of their cottages. Everywhere in the cottage they show me are flowerpots with wildflowers and lavender posies. In the bedroom the feather duvet is puffed and the bathtub with its elegant Victorian, cast-iron pedestals beckons.

A freshly baked farm-loaf sits on the table and from the slit of an open drawer, peep the butter and a jar of jam preserve. It’s all Nikki’s doing. The hearth is packed with wood and the smell of ground coffee escapes a jar alongside the kettle. Every guest to the farm gets this welcome. A short while later, we sip from mugs of steaming coffee between dipping our rusks. I ask John to tell their story from the start.

“Well, back when I courted Nikki, my father-in-law asked how I see my future. I said I hoped to own my own land one day. It took me almost 40 years, but here we are.”

They’ve been on the farm just over a decade. But, it’s especially rare to find anyone who starts farming in their fifties, when their most of their peers are looking to slow down and retire. Neither was raised on a farm: Nikki hails from Kuils River and John, Franschhoek, but his desire has always yearned for agriculture. Both share childhood memories of school holidays spent on the farms of family friends.

Nikki was a teacher before they moved here and for many years, John managed other people’s table-grape farms before embarking on a career in compost sales across the Swartland. That lasted two decades.

Although selling compost wasn’t the most thrilling work, John used it not only to forge friendships with farmers, but also to look around for suitable land that might realise his dream. The couple bought their first land in Moorreesburg where they kept a few sheep and sowed wheat.

When Vleidam became available on auction 12 years ago, John knew this was the opportunity he’d waited for. “The buildings and land were in a bad state. The buildings, which included a large semi-detached house, feed store, former shop (once owned by Jewish brothers) and a dairy, were erected in 1902, 1916, 1930 and the fifties.”

Nikki wasn’t excited about the prospect of moving. She says for the entire month after the conclusion of sale, she couldn’t stop crying. She had a close group of friends in town with whom she enjoyed jogging and going out for coffee, and weekends they’d visit. She couldn’t face having to start a new project, and on a farm where a heap of maintenance and renovation awaited.

Despite her misgivings, they sold their house in Moorreesburg, moved in and began farming in all earnest. John says chuckling that Nikki didn’t really have a choice, “because where I go, she must follow,” but the peace they found on the farm soon spoke louder than his teasing.

“John began taking care of the 490ha farm, started ploughing and preparing the soil and sowing,” Nikki continues. “I started with the animals. I first had Landrace pigs; fattened them and sold them. There’s no major profit because you have to buy the feed, but the cash helped plug a few holes.

“Then I started buying calves and drove myself to Riversdale with a trailer to fetch them. It’s wonderful working with animals. It’s a great feeling to have your animals rely on you, waiting for food and care,” she says.

John applies rotation planting and every year varies between wheat, lupin and other grain crops. One year he even planted mustard. They supply wheat to Overberg Agri whose silos are a stone’s throw away in Koringberg. In addition to the grains, they farm Nguni cattle and have a large herd of Dohne and German-Dormer cross merinos.

John ascribes their farming success to a conservative approach; they never overplay their hand with large expenses. “We couldn’t convince a bank to give us a loan, and have worked with Kaap Agri, which has supported us. I don’t have large reserves like other farmers who have been on their land for generations, so we have to be extra careful.”

He says the biggest challenge annually is to balance the books. “The poor state of the land when we bought it, meant production was retarded. We harvested 1,8 tons per hectare; now at least we’re over three tons.”

John regularly goes to the internet when he hits a farming snag, but his neighbours are also immensely helpful, he says. A friend in agriculture also keenly shares experience. “Furthermore, I’ve spent my whole life on farms, and you learn much from the guys who’ve been around a long time. That which took them generations to learn and test, becomes gold in our enterprise.”

He also relies heavily on his workers, he says. As the farm grew, so have the three families that live and work it. While the men are involved with the wheat and animals, their wives are responsible for cleaning of the guest cottages and so earn an income too. It’s empowerment without anyone really having noticed or planned it.

The Loxtons initially decided to prepare a portion of the 1916 semi-detached house for guest accommodation. The century-old stone and solid clay walls naturally held many surprises and they often wondered what they’d let themselves in for. “We didn’t know where to start: do you chop off the plaster only to expose clay? Or suddenly the hearth crumbles and you lose a support-wall. You have no clue about what to do next,” recalls Nikki. A draughtsman in Moorreesburg, Anton de Klerk, helped them with plans and construction got underway.

Nikki has always loved old things and antique furniture. Over the years, she built a beautiful collection, which was stored in the attic. Now, she could therefore furnish the first cottage with the antiques she’d acquired or received from their parents.

Essential to the operations, says John, has been risk management. The self-catering units have shown to be an ideal way to reduce risk. The income that came from each renovated cottage was used to fund work on the next one and eventually all four cottages paid for themselves. The fourth cottage where the Jewish brothers lived and ran their store a century ago, has just opened for guests.

The Loxtons quickly realised stressed city-dwellers come to the farm both to rest and to experience the environment itself. It’s driven out of nostalgia, says Nikki. “The have fond memories of a father or grandfather’s farm that is no longer in the family and they hope to give their own children similar times.” The hosts eagerly take guests out on the bakkie to see the cattle in the field while children can help feed milk to lambs, to feed the ducks and geese or just run around among the sheep. “Sometimes a lamb mysteriously finds its way to the cottages, where they become a thrilling playmate. The youngster is eventually discovered in the garden eating all the flowers, but at least the children are happy,” she says.

Other activities in the area include a walk up Koringberg or the nearby Misverstand Dam where visitors can take sunset cruises or water-ski. Between Vleidam and its neighbours there’s mountain biking, clay-pigeon shooting and horse-riding, and the region is also on the Swartland Bird Watching Route. More than 250 bird species have been identified in the area.

PLAN B TO Z

I wonder about the lessons they’ve learnt over the past decade, not just as farmers, but as people. Nikki shakes her head and laughs. She says she discovered there’s always a Plan B. “Just keep going, don’t stand still – there’s always a solution to a problem.” John agrees and says you must just start and do things. “Don’t worry too much about side issues.”

When I take a late-afternoon drive through Koringberg I look out over undulating landscape to where I know John and Nikki sit on their stoep, gazing over the wheat and canola. John’s words ring in my ears: “It took me ten years to feel I belong here and really appreciate this is where we want to be. And here we happily are.”