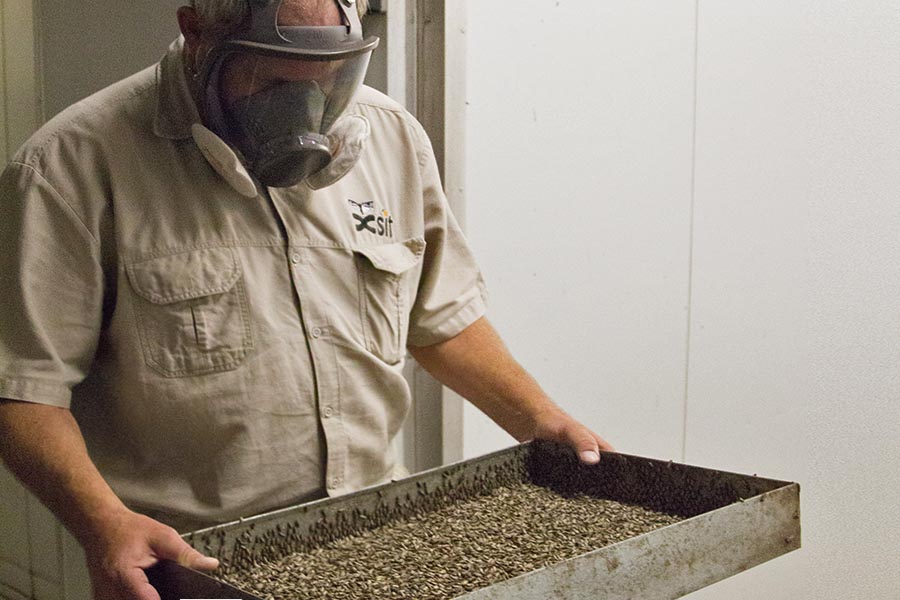 XSIT is the group that fights this war against the false codling moth (FCM). The SIT in XSIT is an acronym for sterile insect technique – a chemical free, effective way to curb FCM populations.

“Our principle is basically to breed large numbers of these moths, to sterilise them and then set them free in the orchards,” the management explains.” The principle behind this is that you should have a real oversupply ratio to ensure that a wild male will not mate with a wild female.”

FCM lay their eggs on the peels of fruit. When the larvae hatch, they drill into the fruit and cause the fruit to rot. According to the managers of XSIT this pest has already cost producers in the area astronomical damage. Approximately 52 million of these sterile moths are bred every week, of which 46 million are released weekly with a spraying aircraft overflying the orchards. “We distribute the moths from September to June,” the XSIT managers say. “In the cool months we do it once a week and in the warm months twice a week.” ‘n Minimum ratio of 10:1 sterile to wild moths is maintained as far as possible.

XSIT says this ratio is monitored by the so-called Delta FCM-traps. Every trap contains the Chempac-pheromone luring the FCM males. Inside the trap is a gummed paper on which the moths get stuck. “Every week we monitor the traps and then we can establish how many are wild and how many are sterile.”

How does one recognise the sterile moths? The answer lies in pink coloured diet on which XSIT raises their moths and which stains their intestines pink.

FCM does not leave a gap in the ecosystem. According to XSIT all research shows that this moth is only a troublemaker. It is also an alien species in the Western Cape. “Our aim is also not to exterminate FCM in totality, but to reduce the numbers to beneath economical threshold values.”

I would like to see how these millions of moths are bred. A production manager accompanies us through the insectarium where there are ideal circumstances for the moths to reach maturity. The first room is covered by pink food wherever you can see – rows upon rows of glass bottles and plastic bags filled with the pink stuff occupies all the shelves. At closer look you will see that every bottle and bag contain a small block of wax paper filled with moths’ eggs and that there are small holes eaten into the bags.

The production manager explains that moths lay their eggs on the wax paper strips in a separate room. Each block of wax paper is then carefully immersed in formalin and placed in one of the bottles or bags. At present both bottles and bags are used because bags are more cost efficient, but cannot yet be utilised optimally. Both contain a membrane that allows oxygen to pass through.

After two weeks the larvae hatch, leave their holders and spin a very fine thread along which they slide down to a corrugated cardboard. There they make themselves at home in one of the holes on the cardboard and they spin the pupae into cocoons.

Next the card boards are placed in special cabinets where the pupae hatch after 10 days. The adult months are then moved to a cooler room to keep them still in order not to injure each other. In yet another cooler room the moths are packed into small cardboard boxes – approximately 15000 moths in each box. Thirty-two of these boxes are then irradiated at a time. Eventually the irradiated, sterile moths are placed in cages, arranged according to the specific area they will be distributed to.

While the SIT strategy is already applied worldwide, the XSIT is the only company in the world applying the technique to FCM. The research and work behind this application was developed by Hendrik Hofmeyer over a period of five years in cooperation with the USA department of agriculture.

XSIT started in 2007 and has gone from strength to strength since then. XSIT is currently divided in three operational areas: in the Western Cape (8500 ha), the Orange River Valley (1500 ha) and the Eastern Cape (9000 ha). Successful experiments have been completed in other areas, but the transport of the moths is still a headache.

They also have plans to start in other African countries and has formed a cooperation agreement with the USA department of agriculture.

The SIT project is not the only objective of XSIT. “We see ourselves as a centre of excellence for the control of FCM in general. Apart from SIT, we also supply monitoring services for export markets, as well as technical support to our producers,” the management of XSIT explains.