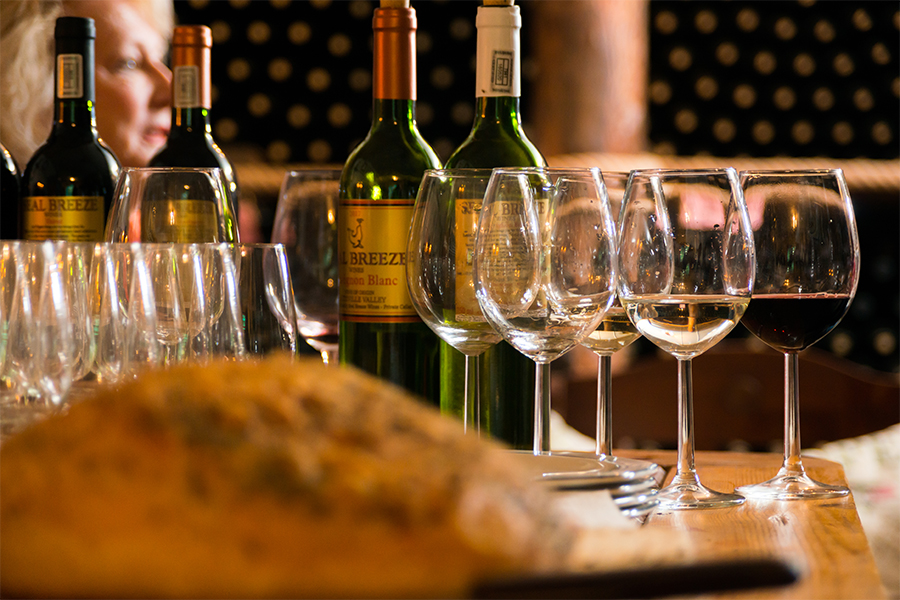 Still a bit shaky after the previous night’s late romping at the Lutzville Hotel, we stop at ten o’clock in front of the entrance to Seal Breeze. At first glance, there is nothing reminding you of the previous two cellars. A simple, sandy inlet from the road leads to a wall. The wall seems to be fighting to keep the jungle out. Scaffolding with seven old vats and two flags indicates that we are where we are supposed to be.

When the door is opened, we immediately find ourselves in a different world. A prickly pear leaf full of succulents draws my attention. When I look up, Joan approaches us with long strides from the direction of the tasting room

“Did you see my heads,” she asks directly.

She indicates with the back of her hand to a collection of rocks further down in the garden. They look surprisingly a lot like faces, but here and there you need to add a little bit of your imagination. Then she bundles us into a line over the diamond concentrate gravel floor into the tasting room. In front of us is a desk with a lot of bottles and glasses. I sit down on a long bench in front of a wall of wine bottles. Before I touch the cushions, a glass is placed in my hand. This is where the trouble starts, I think to myself.

A friend told me telephonically how to make wine. Then, with only 1200 litres of wine, I became the Shiraz champion of the region. And silver in SA. It was an upset,” Joan. ”In 2009 I was the first small cellar that won gold.

Suddenly I look at the bottles in front of me in a different way. “Do you buy in your grapes?” I ask.

“I have now made wine from the same block for 13 years. I handle it myself, suckered and pruned. This year it was over and done with – suddenly it is just sold as a land claims and the vines are standing, withering away. Now I found grapes in Koekenaap, and also at Lutouw, from a black empowerment farm.”

Unfortunately, the vines are mass carriers. In the past she harvested only six tonnes/ha, now it is 20 tonnes. “I had to make a mind shift to be able to make a wine from a mass carrier. But the Cabernet is excellent. The Lord’s hand is in all my wines.”

Joan currently makes wine from four organically grown cultivars – approximately 2  000 bottles per annum each of Merlot, Cabernet Sauvignon, Shiraz as well as a Sauvignon Blanc which she matures. Joan’s way of making wine is also different. Only twelve tonnes of wine are made every year, and everything is done by hand. She is already known for greeting her vines by their names – to feel a connection with her vineyards is imperative for her – but she also follows her own methods in the cellar. Every two hours the skins are pushed through – it is the order of the day. And of nights as well.

I sell exclusively from here. My wines are not on shop shelves, also not in a restaurant,” she says while she pours us proper tasting sips. “My white wines stay fresh because I use a lot of dry ice – I use about 30 kg on 3 tonnes of grapes, to displace the oxygen. I go to another world when I make wine.”

Noticeably of the firm, yet soft acidity of the Sauvignon Blanc is the fact that it tastes fresh, even after three years. The 2017 vintage has the same acidity character but is a completely different wine purely in the way it was harvested. The obvious fruity flavours carry the heavier nettle and asparagus flavours and gives the wine an exceptional balance. This is a wine to remember.

In the mean-time Joan brought in a fresh spice bread and tomato – and chilli jam. I am still filled after the massive breakfast at the hotel but cannot wait to tug into this. I will be able to eat the jam neat. Both the Merlot and the Cabernet is exceptionally soft. Only old vats from Le Bonheur are used.

All three wines taste nice. The heavier 2016 vintage impresses me a lot, but strangely enough it is the third, lighter 2014 vintage that impresses me more, even though it comes from mass bearers. “It comes from Riaan de Waal’s farm Holrivier.” If Joan can only sustain all of this…

One soon realises that you should not be mislead by Joan Wiggins’ unconventional, down to earth nature. Joan makes impressive wines. Of the 105 Shiraz entries at the South African Young Wien Show that last year received awards, only seven gold medals were awarded. One of these was Joan’s. She also received both the producer-winemaker award as well the champion Shiraz trophy. For someone who started making wine at the age of 51 without any formal training with grapes bought from elsewhere on the West Coast, it says a lot. Again, the cool, salty sea breeze makes a big difference even though the vineyards are almost 8 km from the sea.

TO THE CELLAR WITH VISION

Before we walk to the cellar, Joan shows us a piece of vine which to her resembles a woman and her son. For a while I try to see what she sees. The everything falls in place – it is a normal pareidolia* as seeing a face in a rock, Joan can already see in the vines which wines she is going to make. Then she simply goes to the cellar and makes the wine, come hell or high water.

In the cellar we taste one or two of her new wines from the vat. The flavours of the Cabernet are still a bit distant from each other, but one knows it will become a great wine. Once again, I realise how separate Joan’s wines are from those of the rest of the country. It is almost as if she wants to re-write the book and succeeds every now and then. However, it is the young Shiraz that stands out head and shoulders above everything else. It tastes the way it looks: pitch black, but in the aftertaste, there is the brooding tastes of a prizewinning wine.

Then I think about Joan’s iron will, and what she said about the vineyards she lost: “I will not stop. I. Will. Not. Stop.”

*Pareidolia is a psychological phenomenon when one’s brain reacts to a visual or sound stimulus by forming a pattern where there actually is no obvious pattern present, like seeing a face or an angle in the clouds.