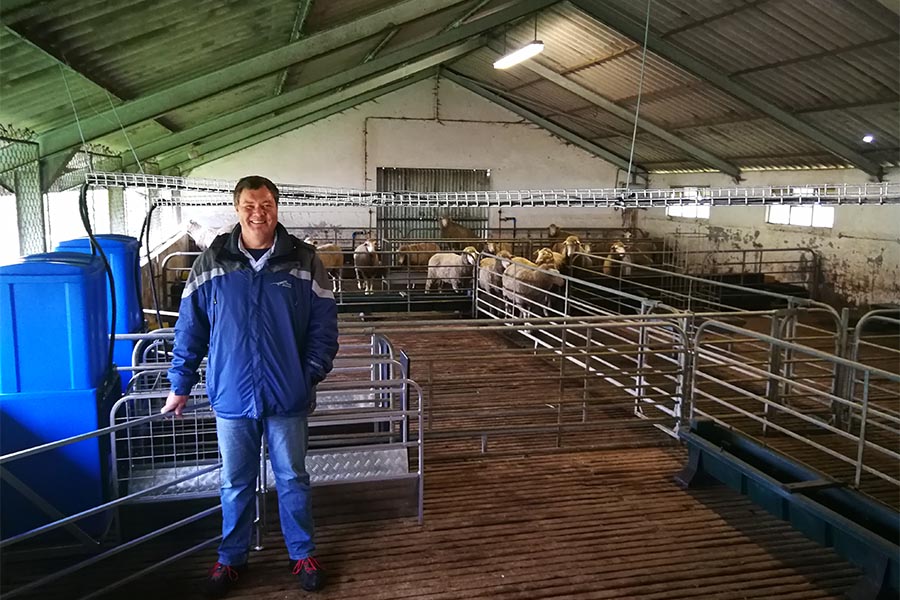 Livestock research on the nutrition of sheep will henceforth be done more easily, faster and more precisely at Stellenbosch University (SU). This is thanks to the installation of an advanced autofeeder system at the Welgevallen Experimental Farm, a facility managed by the SU Faculty of AgriSciences. The system was donated by the agricultural company BKB to the SU Department of Animal Sciences. It allows researchers to track exactly how much feed each sheep in a herd consumes per day, and what each animal’s subsequent feed conversion is during a trial. It helps livestock researchers to do better efficacy studies, and to accurately calculate the effects of different diets on an animal. The software and technology behind the autofeeder were jointly developed by firms in South Africa and Germany and then acquired by BKB.

Up to 100 sheep can currently be handled in the demonstration unit. The donation to the value of a quarter of a million rand also includes a mobile autosorter, with which a herd can be weighed and sorted more easily and efficiently.
First in South Africa

“Such technology has not yet been used elsewhere in South Africa, on an experimental or commercial basis. Being able to put it to use provides special opportunities to researchers in the SU Department of Animal Sciences,” acknowledges Dr Brink van Zyl, chair of the SU Department of Animal Sciences. “We will mainly be using it in trials that look at the intensive feeding of sheep.”

The equipment consists of a plastic feeding system with a funnel on top. It stands on a very finely calibrated scale. If animals want to eat from it, they have to push their heads through an opening in the container, around which an electronic reader system is installed. This system automatically “recognizes” the individual yellow tags attached to each animal’s ear.

The system calculates how much each sheep eats per session, based on changes in the weight of the feed falling into the container. The system records how much, for how long and how often each sheep feeds, and how much it has in one go. After each feeding session, the information is automatically sent to an overhead computer system. The specially developed software program then processes the data into a daily report which can be further analysed by the researcher involved.

According to Dr van Zyl, it used to be quite time-consuming for the University’s researchers to manually collect information about the feeding patterns of individual sheep for their experiments. They had to manually weigh the amount of feed every day left over after each animal had fed. Animals also had to be kept in separate camps, because it was the only way to determine how much each sheep in an experiment consumed.

“The new equipment not only automates our research but also promotes the well-being of the animals in our experiments. It allows us to keep them in a larger, more natural herd,” Dr van Zyl reckons.

He says the hardware and software attached to the system can also be used to improve the traceability of sheep. It would be possible to adapt it to accommodate other types of livestock.

According to Schalk de Villiers, for BKB, the company is pleased to invest in technology that adds value to education, research, their customers and the livestock industry as a whole.

“The unit will enable research in several areas. This will be of great value to all role players in the industry and will help ensure more profitable production in an increasingly challenging environment,” he says.

Three master’s students in Animal Sciences at SU will, in consultation with the industry, be the first to use the equipment when conducting feedlot studies on lambs. One student is to investigate the manipulation of fat deposition in lambs based on options of different nutritional value. Seven different diets will be tested to determine the impact these have on how fat is deposited in Kalahari Dorper sheep and Karoo Dorper sheep. A second student will evaluate whether savings in Vitamin A and Vitamin E supplements can be incurred if bioflavonoids are added to the diets of feedlot lambs. A third student will investigate alternative dietary protein sources for such lambs.

According to Dr van Zyl, a high performance sheep testing facility is currently being considered. Several industry partners have already expressed their interest in conducting studies with the Department of Animal Sciences in the new facility.