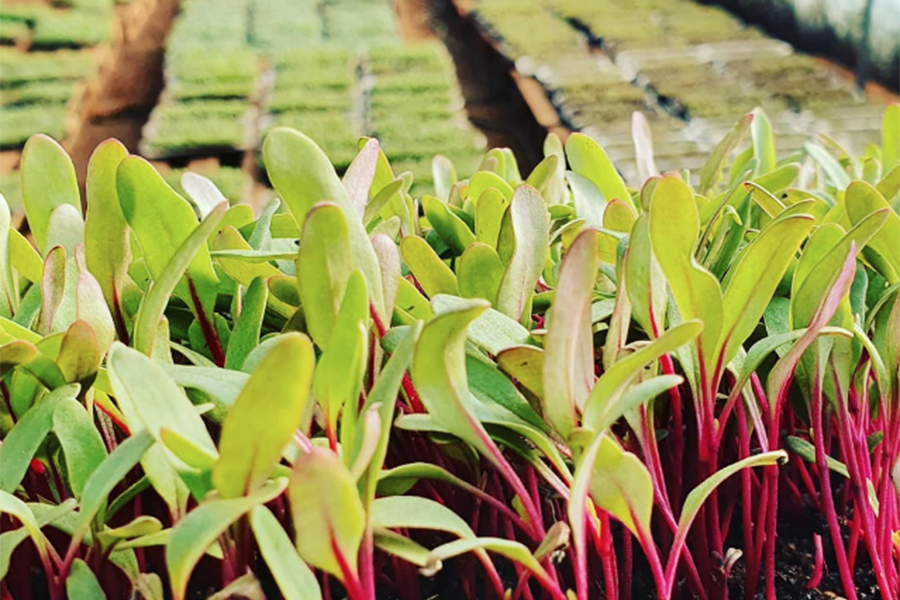 MUCH HIGHER NUTRITIONAL VALUE THAN THEIR MATURE VEGETABLE EQUIVALENT

Microgreens – an umbrella term for a variety of vegetable leaf greens that are harvested at their first, true leaf stage of growth – with their array of colours, textures and flavours have become common place in high-end restaurants as a culinary ingredient to enhance salads and serve as edible garnishes.

But microgreens also have the potential, as an emerging superfood, to impact how we consume vegetables in the future.

Schalk van Rooyen, natural scientist and technical consultant for Laeveld Agrochem in the field of botanical extractions, says microgreens and in general most young plants, have more nutritional value than their full-grown vegetable equivalent.

This is because the small plants still need to grow, needing greater concentrations of nutrition to grow into a mature plant. He references a study titled “Assessment of vitamin and carotenoid concentrations of emerging food products: edible microgreens”, which appeared in the Journal of Agricultural and Food Chemistry* which found that microgreens had 4-6 times more of certain vitamins (e.g. Vitamins C and E) and other phytochemicals like beta carotene compared to their mature vegetable equivalent. There are even recent studies which show that in some cases the vitamin and mineral level can exceed that of full-grown vegetables by as much as 40 times.

“Other than the role that the attractive colours play in lightening up the visual perception of foods like salads, the intense colors of certain microgreens also indicate the presence of various phytochemicals with very good health benefits. The phytochemicals form part of the carotenoids, anthocyanidins and proanthocyanidins groupings and consist of beneficial antioxidants that counteract systemic inflammation in the body, improve blood circulation, lower cholesterol, protect sensitive tissue like the brain and the retina of the eye and help prevent diseases like cancer,” Van Rooyen says.

He further adds that the levels of phytochemicals in microgreens are higher than in mature vegetables and some of them are only found in microgreens. “Hence, it is especially important to eat these small plants. Otherwise one misses out on certain, unique phytochemicals.”

On average, microgreens are harvested 10 – 14 days from seeding, just after the cotyledon leaves have fully developed and include plants like amaranth, beet, broccoli, yellow and red mustard, rocket, radish, Chinese cabbage, swiss chard as well as sunflower and pea shoots.

Andrew Stiebel, co-founder of First Light Farms in the KwaZulu-Natal Midlands says they have seen a steady increase in the demand for their microgreens since he and his business partner Byron Piccione founded the niche farming enterprise in 2017.

First Light Farms targets both restaurants and retail stores (supermarkets, health shops, online stores, etc.) with the former being their biggest market. “We have seen an increase in popularity from restaurants because we have ensured we have an affordable, long-lasting, and high-quality product. Chefs only use a small amount to add to the taste, texture and aesthetics  of the plate being served, which explains why our microgreens have become ‘feasible’ in the modern-day kitchen. The retail market is much harder to crack and requires a lot of work and creativity.”

Microgreens are relatively easy to grow and require low maintenance which has led to its increase in popularity among home growers and others growing them on a small scale.

Setting up a microgreen operation on a commercial scale also has its advantages relative to other possible niche farming operations. For one, it does not require much capital outlay to get going and little space is required to grow them.

Furthermore, most microgreen varieties are ready to harvest within two weeks, meaning up-to 25 crops per year as they can be grown year-round. They also require less water and energy to produce over other vegetables.

However, Van Rooyen says a lot more still needs to be done on the demand side to grow consumer awareness of microgreens as a future superfood. “Consumer demand will in a big way drive the market, but this should be stimulated as more restaurants include it in their offering and more supermarkets have it on their shelves as a standard item.”

“Moreover, seeing that microgreens need such little space to grow; just think of the possibilities if city dwellers were to grow their own produce en masse. This would not only contribute to the return of cleaner air to our urban areas but also lead to the return of a variety of insect species that will add considerably to the biodiversity of our cities.”