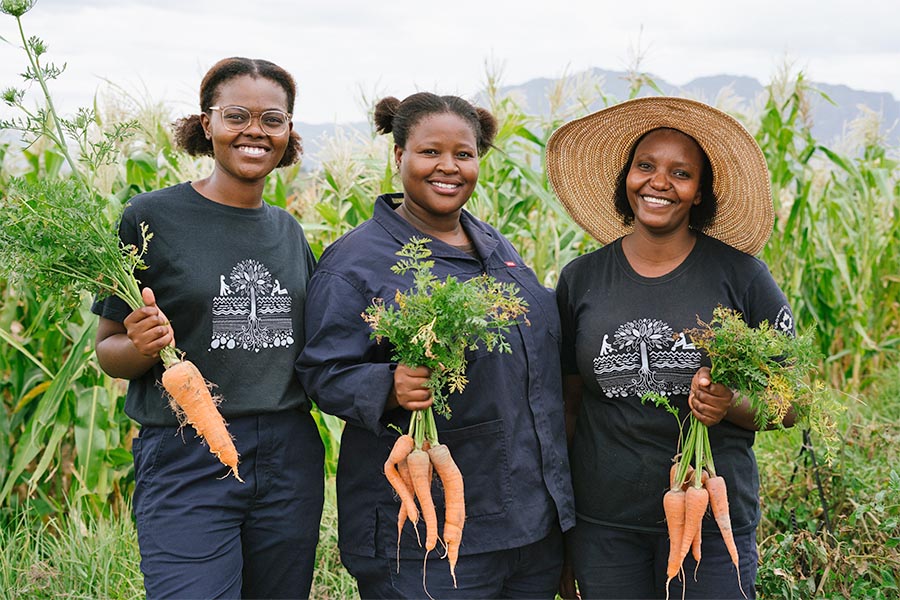 Within eight months of starting with the project, the first harvest of vegetables from the Living Soils Community Learning farm started in November 2019 and since then, approximately 1700 kilograms of produce have been harvested from just under a hectare land. The produce harvested includes carrots, broccoli, cauliflower, cabbage,  lettuce, cucumber, baby marrow, tomatoes, butternut, gem squash, spring onion, green pepper and soon mielies.

“It was a wonderful moment when we delivered the first order to the Sustainability Institute, to use in the meals prepared for approximately 200 impoverished and at-risk children from the Lynedoch community that attend one of the schools at the Institute. This is one of the main objectives of the Living Soils Community Learning farm, to improve food security within the community, starting with early childhood development (ECD) centres,“ says Rirhandzu Marivate, Project Manager for the Living Soils Community Learning Farm.

Thirty five percent of the produce went towards the various feeding programmes at the Sustainability Institute, and the rest of the produce was sold as veggie boxes, to local restaurants and wholesalers, with the surplus being donated to Food Forward or in the Lynedoch community. “Even though we planned what yields need to be ready by a certain time to not have any food waste, nature cannot be controlled. The climate resulted in our crops ripening quicker than expected and most vegetables were ready for harvest during December and January. This is the time that schools are closed, and we had to quickly find alternative buyers,” adds Marivate. The team is working on expanding the market to sell produce to, including surrounding ECD centres and wholesalers.

Before pulling the first carrots from the ground, and cutting the first heads of broccoli, a lot of hard work went into preparing the soil, getting irrigation in place, growing seedlings and working with nature to manage pests. “We were faced with a seemingly impossible task of starting a farming project with three interns, guided by an experienced farmer. Poor soil quality, deep rooted kikuyu and limited infrastructure is what the project started with, while we were all still gaining in-depth knowledge of regenerative agriculture. Even so, this did not stop the team. Instead it made us more determined to push forward and regenerate the soil, enabling the first seedlings to be planted in August 2019. Three months later, we harvested our first vegetables – this reward was incredible,” says Marivate.

Over the next few months planting for the winter crops will start. Turnips, leeks, carrots, broccoli, cauliflower, cabbage, kale and spinach will be planted. There are still two more hectares that can be cultivated.

Another goal of the farm is the provision of training and learning that empowers emerging, young farmers with the skills to tackle food insecurity and youth unemployment. “I am extremely proud of the team and the incredible growth in their confidence and leadership this past year. A few more young farmer interns have joined the team on the farm this year, giving the project increased opportunities to develop the skills of local young farmers. We have had a lot of opportunities for learning in the first year and are making sure to put the project in a better position to grow and continually affect change, within ourselves and our community,” says Marivate. Under the guidance of farm manager Eric Swarts and additional support provided by Spier farm manager Orlando Filander, Sustainability Institute’s permaculturist Yoliswa Mahobe and Woolworths Farming for the Future expert Kobus Pienaar they are receiving the best possible support.

“Witnessing this first year of the Living Soils project has been truly inspirational. Being able to grow food to feed the community has to be one of the greatest sources of fulfilment for everyone involved in the initiative. The project enables young farmers to learn how to farm using environmentally friendly regenerative farming techniques – a contribution to influencing a sustainable future in farming and food security. We thank the three young women farmers – Phuthuma, Vuyolwethu and Thandiwe, as well as Rirhandzu and Eric for their enthusiasm and hard work as well as the mentors who have generously given their time and shared their expertise. It has been a huge collaborative effort, and the approach needed to make a meaningful and sustainable difference, “ comments Zinzi Mgolodela, Woolworths Director of Corporate Affairs.

The Living Soils Community Learning Farm, an initiative between partners Woolworths, Spier and the Sustainability Institute, is a learning farm situated in Lynedoch, Stellenbosch that is demonstrating ecologically-restorative methods to grow nutrient-rich foods to improve community food security.

Reflecting on the recent harvest and project successes to date, Heidi Newton-King, Spier’s HR and Sustainability Director shares: “We have experienced during this year the power of a collective, unified with a common purpose. Every person involved in this project embodies the commitment to learning and delivering on our agreed goals.”