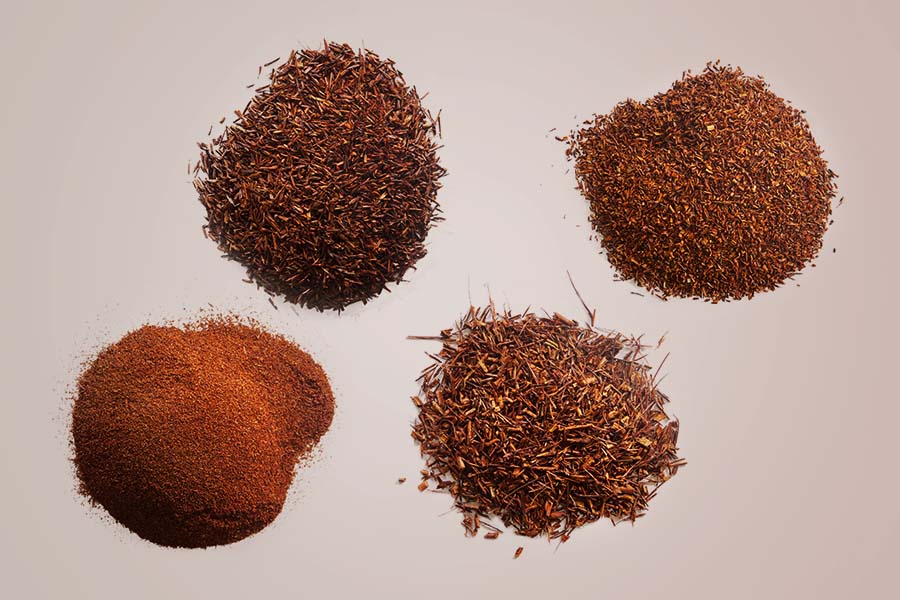 The town of Graafwater lies next to the R364 about half way between Clanwilliam and Lambert’s Bay in South Africa’s West Coast. In the north, wheat fields dominate the landscape, while potato farmers are dominant in the south. This region is part of the Sandveld, known all over as one of the country’s top regions for the cultivation of potatoes and tea. The sandy soil provides clean soils for planting healthy potatoes and excellent quality tea, but the price paid by farmers for this clean soil, is high input costs

Apart from the potatoes, the Graafwater region is also home to various rooibos tea producers, and it is at Groenkol Boerdery where we also pay a visit. At Groenkol approximately 250 tonnes of rooibos is harvested annually in an eight-year crop rotational system. Willem Engelbrecht explains how the rotational system works. In the first year the rooibos is planted and in the second year it is cut at knee height. In year three to five the tea plants are harvested.

To reap the benefits of the pasturage planted, a feeding pen is also run at Groenkol. Willem explains that he runs an intensive system with his lambs and his 900 commercial meat merino ewes. “There are six flocks of 150 each, giving birth every nine months. So, every six weeks one of the flocks are in reproducing. For six months of the year we utilise meat merino rams and out of the new animals, we keep replacement ewes and breeding material and for the other six months we do terminal crossings with Dormer rams.”

Groenkol also operates a meat Merino and Dormer stud, as well as a Simbra beef stud with about 50 cows.

To curb increasing problems with red jackal, leopards and caracal, the ewe lamb under pivot irrigation systems fenced in and a lamb pen system where the ewes and new-born lambs are kept for the first week or two.

But the core of the business has always been rooibos. Willem believes that, if you want to farm rooibos sustainably, you need to control as much of the value chain as possible. Therefore, Groenkol processes, packages and markets all its own rooibos through various business units. One of these is Elandsberg Tea Processors (ETP) who not only processes and packages Groenkol’s tea, but also processes and packages tea from various other producers.

“We are set on quality,” Willem says, and also mentions that rooibos was seen as a commodity in the past, but the picture changed over the past five or six years and buyers are prepared to pay a higher premium for higher quality tea. “We focus on that higher price bracket.”

To get the tea to a proper consumable product, is an involved process. At ETP six tonnes of rooibos is processed every day. That represents about 2,4 million cups of tea!

For the fermentation and drying process, a massive drying slab of three quarters of a hectare is used. And once the tea has gone through sieves to get rid of rough sticks and tea dust, it is pasteurised first. However, it cannot get wet and for that reason the steam used in this process is a dry steam produced under high pressure and which can reach a temperature of between 126 and 144 degrees Celsius.

We chat about challenges for the rooibos industry and I ask how the serious drought in the Western Cape of the past few years influenced them. According to Willem they only realised a little more than half of the normal harvest. Different to potato farmers who irrigate their potatoes with pivots, it is not economically viable for tea farmers to irrigate their land.

Firstly, the cost to create the irrigation infrastructure is too high, but even more important is the fact that rooibos does not thrive under irrigation. Willem thinks the complex taste of rooibos will suffer if the plant does not experience enough stress, negatively influencing the quality of the tea.

Regarding challenges, Willem thinks that price fluctuations in the industry makes it difficult to do advance planning. A few years ago, the farmers were hard hit by prices that declined to R4.50/kg, but more recent prices reached R55/kg.

“Supply and demand are also an issue and producers will have to think differently. To ensure that there is enough tea in the marketplace, we will have to carry bulk stock in future.”

Before we depart, Willem says that people can visit Groenkol and see how they produce, process and package tea. “We receive about 1200 tourists on the farm annually,” Willem says. “My father and sister and her husband handle the visits. It is a rooibos and fynbos tour en we call it Elandsberg ecotourism.” For more information read more at www.elandsberg.co.za. For routes and accommodation go to www.boegoeberg4x4.co.za.