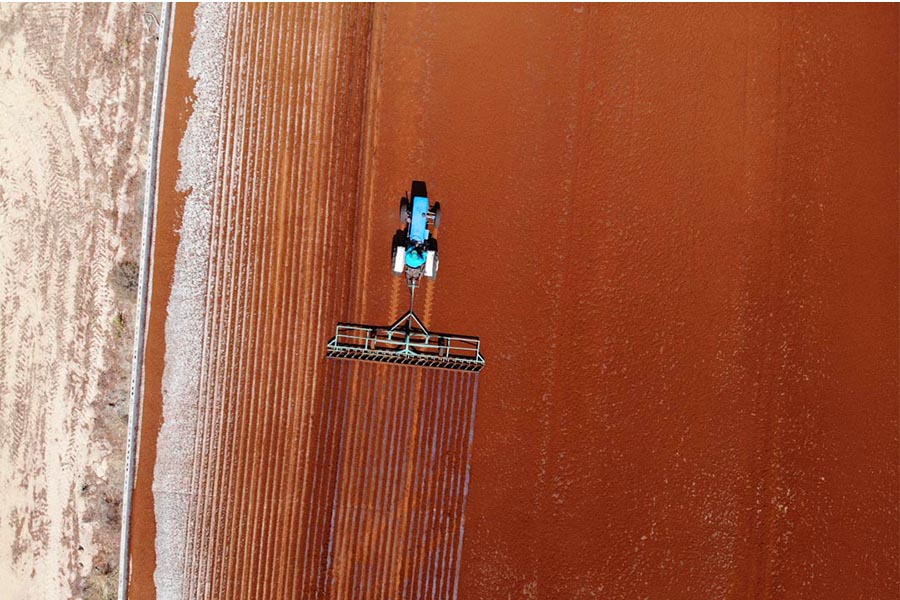 [Rooibos, Afrikaans for red bush; pronounced ROY-boss, is a red herbal tea made from the fermented leaves of the Aspalathus linearis shrub, a plant native to South Africa.]

The Clanwilliam region places a variety of vegetables and citrus on tables worldwide but it is most famous for being the birthplace of commercial rooibos tea production. This is where a bush as ancient as the sky under which it grows, was transformed into a global symbol of herbal rejuvenation.

Benjamin Ginsberg, a Russian immigrant descending from a family of tea traders, traversed the Cederberg area as a traveling salesman from 1903. He bought wild mountain tea from small farmers for resale, until the Great Depression hit. The exorbitant price of black tea (English breakfast tea) forced many South Africans to embrace rooibos tea. Small farmers could not keep up with the provision of wild tea and with Ginsberg’s encouragement, Dr Pieter Lefras Nortier, Clanwilliam’s district physician and an enthusiastic plant expert, started experimenting with commercial rooibos cultivars. Dr Nortier and a farmer, Oloff Bergh, succeeded in 1930 to increase the germination percentage of seeds, which transformed rooibos into a workable agricultural crop. Ginsberg founded Eleven O’Clock, the first rooibos tea brand, which still exists today. Martin Bergh, the managing director of Rooibos Ltd. and the chairperson of the South African Rooibos Council, is a descendant of Oloff Bergh. Rooibos Ltd was founded in 1954 as the Rooibos Tea Management Board and was privatised in 1993 as Rooibos Ltd.

“People don’t realise how small the rooibos production area is, and that this is the only place in the world where it grows. We are literally talking about an area 200 km from north to south, and 60 km from east to west,” says Marijke. Attempts to cultivate rooibos tea elsewhere in the world – even in France – have always failed.

The rooibos plant is incredibly well-suited to the area. “They say ‘hardship builds character’ and this plant wants to suffer a bit. If you plant rooibos in good soil with lots of rain, the tea will be thin,” she says. When the rooibos plant is under pressure, it activates a natural protection mechanism that increases the plant’s antioxidant level, which makes it so sought-after.

Rooibos seed is hardy and the outer shell must be removed for germination to take place. It is this process that Nortier and Bergh duplicated to enable the cultivation of rooibos. “Rooibos is part of the fynbos biome and there are 7500 types of fynbos that must burn through veld fires in order to germinate. The ash from the fires causes the soil’s acid levels to rise, which destroys the seed’s hard shell. Our mechanical tumbling process has the same effect,” says Marijke of this process that is done solely by Rooibos Ltd. Farmers deliver their seed to Rooibos Ltd. for processing, after which the seeds are germinated by rooibos nurseries in the area.

Seedlings are pampered throughout the wet winter months in seed beds, before being planted into tea lanes from August to September. Once established in the drylands, they’re at the mercy of mother nature. Rooibos plants are only topped during the first harvest, after which they’re harvested annually for three to four years, depending on the condition of the plant.

The massive tea-drying concrete courts at Rooibos Ltd. lie reddish brown beneath a clear blue sky. Low walls prevent a breeze from blowing the tea away. I begin to understand why the rooibos production zone is so small. In addition to specific soil and climate for growing the tea, the drying process is also highly dependent on favourable weather conditions. “It must be warm, with little or no wind and absolutely no rain. In that respect, Clanwilliam is ideal,” Marijke says. “Nobody watches the weather as religiously as a rooibos tea processor!”

Tea is chopped into fine pieces and laid out in piles on the course to oxidize. Then, the piles are picked up and spread out to dry, with the entire oxidation and drying process taking only 24 hours. Even a light drizzle can be catastrophic during this crucial drying period. “We had a potent cloud break four years ago and lost 30 tons of tea within an hour,” she says.

When the tea courts are in full production, Rooibos Ltd dries 130 tons of tea per day. “This is when the guys put in a lot of overtime. Throughout the rest of the year, we carry on with secondary processing.” The plant has 171 permanent employees and takes on temporary staff during harvest time. “They have tried to dry rooibos indoors but it affects the taste profile. Oxygen, moisture and heat drive the oxidation process, which changes the tea from green to red and gives its distinctive flavour.”

The plant takes in wet tea, as well as tea that has already been dried. Deliveries enter through one gate and samples are drawn and tested on arrival. The tea is screened for cut size and sorted according to quality, after which Rooibos Ltd. blends tea from all their producers to ensure consistent quality.

Rooibos Ltd sells 95% of their tea in bulk to companies that pack and distribute under their own brands. About 50% of tea is sold locally and the balance is mainly exported to Germany, Japan and the USA. Asia is an emerging market with exports increasing to China and Sri Lanka. “About 15% – 20% of our total production is grown organically – we do everything from organic, conventional and Fair Trade, to a wide variety of certified teas,” says Marijke.

We visit the quality control department where every incoming and final batch is subjected to a blind tasting. With dry tea, they look for a nice shiny, brick-red colour. A yellow undertone means the tea is under-oxidized. Sometimes the tea is dull, almost grey, which is often a sign of too much wetness on the courts. Green rooibos is not oxidized outdoors and goes directly from the cutting machines to an indoor heated drying bed.

We’re greeted by a row of brewed tea in glass jars. Long-cut rooibos is sold as loose tea. Superior short-cut is processed in tea bags and the fine-cut and classic double-cut are used for more exclusive labelled tea bags. Finer cuts contain less stem and have a higher leaf percentage, with more spice and fruity jam flavours, while longer cuts show softer wood, flower and honey flavours. Old fashioned long-cut cane tea that brewed in a pot or kettle is my favourite, with its deep, distinctive rooibos flavours. It’s been decades since I brewed loose rooibos but it after one sip, I’m reminded that there’s only one way to make proper tea.

The total crop for 2020 is estimated to be slightly less than the 20,000 tonnes harvested in 2019, which is still well above 2018’s 13,500 tonnes. The rooibos price peaked with 2018’s drought deficit, and since then the domestic price has dropped significantly. Although rainfall has increased over the past two years, it is still below average. However, there were so many new rooibos plantings that 2019 produced a record harvest, which lowered the price. “Because we are the largest in the industry, it is very important for us to maintain market stability,” says Marijke. “Especially after the uncertainty of the past few years.”

The rooibos industry believes in a seven-year cycle of drought and abundance, which determines the tea price. “What made the last drought so bad is that it lasted two years longer than expected,” she adds. We leave Rooibos Ltd. to visit their tea house in the heart of Clanwilliam. I buy loose long-cut tea and a variety of flavoured iced teas, blissfully unaware that the country would descend into pandemic-induced panic buying less than a week later. And what a fortunate purchase it was, as there are few things as healthy and comforting as a strong cup of rooibos with lots of honey and lemon.