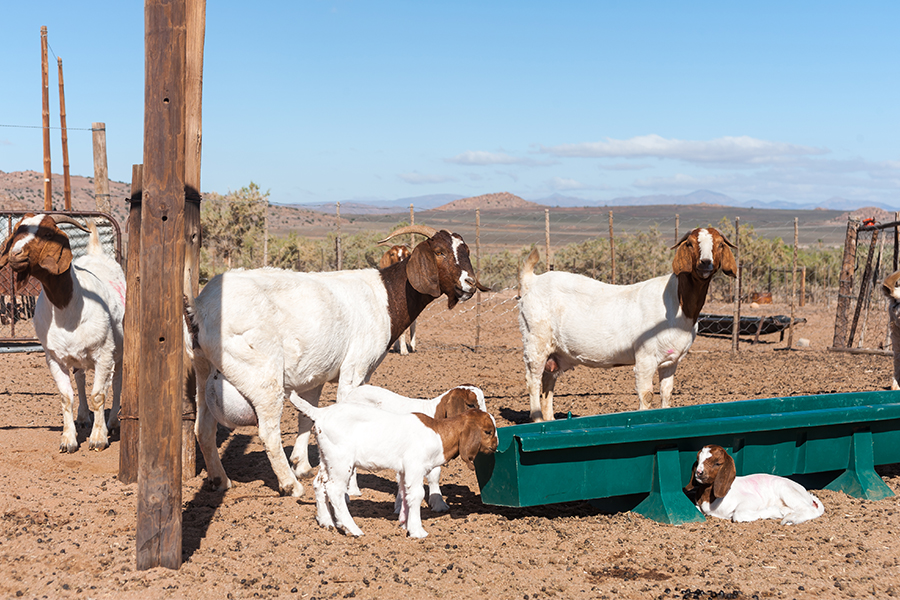 The Namaqualanders are salt of the earth – people who understand struggle, persistence and resilience, writes Maryke Roberts. The veld around Springbok is green; it’s amazing what a few millimetres of rain can do for barren soil. We drive for almost an hour from Springbok to get to Albertus and Christine Roux’s farm, Rietfontein. It’s early and the rocky outcrops we pass give us a sense of becoming one with the landscape; eternalised in a Pierneef painting with the sky coloured in pastel pink, yellow, orange and blue.

Over a cup of coffee, I recount the experience for Albertus. He laughs: “Indeed. This part of the world really gets under your skin.” My nostalgia doesn’t wane: when last did I hear such beautiful, descriptive Afrikaans spoken as only the Namaqualanders do?

The Rouxs are the sixth generation on the farm – direct descendants of the French Huguenots that came to Namaqualand in 1850. Albertus chuckles and says the veld probably bloomed extraordinarily that year because great great grandfather Pieter Johannes Roux decided to relocate here from the green and fertile Paarl.

The establishment of farms was a direct result of mining in the area – in those years, especially copper. The copper had to be transported to a harbour at Hondeklipbaai; cattle farms to ensure supply of oxen and wagons were in great demand. In the 1880s Albertus Johan Myburgh established a show-farm thanks to innovative plans. He took fresh, rested animals to the harbour so they could cart wagons filled with supplies back to the mines.

Further in the bloodline are other pioneers who farmed with amongst others citrus, figs, vegetables and even roses. The aim was to supply the luxuries of their homeland to the English “ladies” who arrived on South African shores.

The arrival of rail meant ox wagons were replaced by cocopans and once again Roux spotted an opportunity that launched his breeding of mules. Some 1 000 donkeys from Spain were crossed with horses and his mule enterprise blossomed.

Another of their ancestors, Bertus Roux, was the co-founder of the Meat Board that later became Vleissentraal. “Under his tenure, the South African meat trade became a regulated, organised industry. Meat was exported to England. That man made us understand that you can whatever you set your mind to. He was responsible for the establishment of farmer associations and encouraged farmers to market co-operatively,” says Albertus.

He and Christine have farmed at Rietfontein for 29 years. The farm extends across various properties – from Boesmanland to transition farms to the reaches of the Kamies Mountains. It encompasses various veld-types – savanna, bush-veld and transition veld – and also across winter and summer rainfall areas. He explains that clay soils encourage bush-veld, while sand is associated with grass-veld.

His farm’s success rests on numerous principles, but the systematic pasture organisation where animals only spend a week in a camp, is their focus. He says this gives the pasture’s root system a chance to develop. The pasture is suitable for black-head dorper and there’s a good market for its meat.

The enterprise is evenly divided between black-head dorpers and Afrigus – a cross between Afrikaner cows and red Angus bulls. “The animals have the stamina of an Afrikaner, but the fertility and milk of an Angus.

Albertus says the cattle farming is less intensive than sheep, with the latter also being a target for predators. He is surrounded by government land that is poorly managed and is therefore a thriving breeding ground for wild animals.

He says that caracal “just can’t ignore a dorper, whether it’s hungry or not”.

“However, we can’t farm with cattle alone; the pastures are not suited for it, which explains the mix. We have a cow-calf farm after having moved from being a cow-ox farm.”

Here too the drought’s tentacles have penetrated, and Albertus admits that it feels like a dessert tunnel collapsing behind you. “You have no choice, but to go forward.”

Six weeks prior to our visit, they had their first rain – 35mm over three days. I wonder aloud what their average rainfall is. He laughs and says he has no clue, except to say they need more to farm sustainably. “We can push through with 50mm – if it falls at the right time. One year, we had 14mm post-winter and the milkwoods came up. It’s toxic for the cattle and we lost 40 animals in three weeks.

“Ordinarily we prefer to get around 100mm. We got that seven years ago, but since then rainfall has dwindled. We must allow our ewes and cows to give birth later to raise the offspring for market. Our profit lies in our being able to achieve lambing twice in one year.”

Borehole water is their artery; after 25 years they drilled and found fresh, strong borehole water that supplies consistently for their garden and vegetables. Dams were created and solar pumps have changed their lives, Albertus admits.

“The water is strong every day; we are Canaan.”

He says he realised early on that farmers must stay on top of technological advances. “The initial costs can potentially be large, but the savings in the long-run are enormous.”

Later, we chat about Christine’s flourishing goat-farming. “Yes, it all becomes quite stereotypical for a woman because she isn’t directly involved like her partner. I’m happy that she has something to be proud of and in which she has done well.”

I look around the lounge; her crochet and sewing works are everywhere. Beside the sewing machine on a workbench is a small heap of fabric – she’s making curtains for a local community project. And alongside my handbag is a jar of fig preserve. The goat farming is more than just something to keep her busy.

When we later take a walk amongst her goats, I can see that she has also embraced this part of the business with enthusiasm. She scoops up lambs and shows us their colours, noting their birthdays as well. Albertus remarks that she’s been through two rough weeks of little sleep and long hours because she attended to every ewe during lambing-time.

I wonder how her involvement came about. Christine explains: “Oom Tertius Archer of Kamieskroon arrived here one afternoon. It had been a dry year in Namaqualand. He had four pregnant ewe goats on the back of his bakkie. When Albertus started to look interested, he said he’s wasting his time – the goats are for our children.

“The children naturally enjoyed them thoroughly, but when they left for school and later left home I took over the responsibility and expanded the herd. Now I have an average of 125 ewes with 150 being the most I can accommodate.”

She enjoys the goats for the empowerment it gives her. They also planted lucerne for the goats.

Last year, she had a 200% lambing percentage, but admits that it wasn’t an easy year because she had to feed for 365 days. The Rouxs are however unmoved in their perspective on the farm. “You never give up hope. You just make new calculations every day. Thorough planning and budgets are non-negotiable,” says Albertus.

The wisdom of a friend who believes you should never live higher than the shrubs in your environment has become entrenched in their own business. As such, Albertus makes accommodation every year by purchasing feed and storing it for his livestock. There’s always enough feed, phosphate and concentrates for a whole year.

“It means that we can go through a dry year without any costs. The problem comes however when the drought extends to beyond two years.” His saving as a farmer is based on the example of his father, James, who at 80 years of age still does his own bookkeeping. “He inspired me to farm at lower pasture capacity with higher productivity; make considered acquisitions of ewes and rams; and, approach farming by applying simple mathematics.”