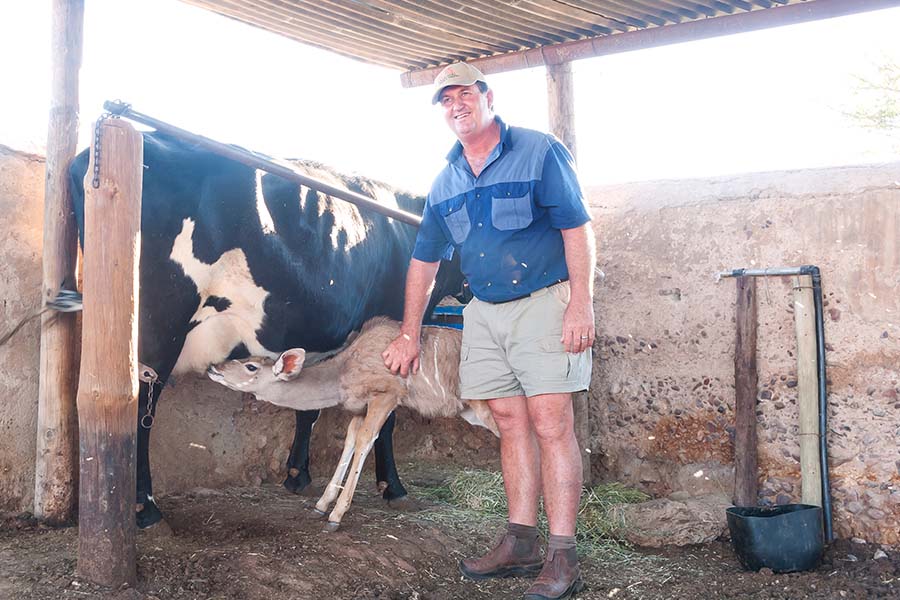 A couple that has innovated with a diversified farm and a visitor friendly approach makes waves in a fickle market.

Not far from Upington I realise how honest the landscape has become. We’re driving on the R360 outwards, north of the city and there are no more powerlines; just a rule-straight line of tar and fences cutting through the stubble-veld around us. We spot our destination just beyond the first sign advertising the start of the Red Dune tourism-route. We spy among a copse of low trees a roof lit up unexpectedly by the reflection of winter sunrays. It’s the home of Paul and Riana Loots, owners of Farm Uitsig and the Kalahari Guesthouse and Farmstall.

First conversation is a jumble of hellos and talk of the weather. It hasn’t been an easy topic for some time, especially in this region – here where no-one ever had a choice about living “off the grid”. “The breeze is warm, but not as hot as in December,” says Paul over a glass of Riana’s ginger beer that’s labelled “old time, hand-made”. “Our rain usually falls between October and March/April. One year a light shower only arrived in June. And this year [at time of writing] we only had rain in April. That’s why the veld’s so wonderfully green.”

There’s no shortage of drinking water. “The farm has plenty: underground and dam, and there’s also the pipeline.” Paul refers to the 440km supply network extending from the Orange River and covering 695 000ha of the western Kalahari. It was built during the drought of the 1980s.

The regions farmers previously used reservoirs, but when the water dried up they were forced to cart water by road. “It became impossible. With today’s fuel prices, that would have been impossible today,” he says. “The farmers came together and borrowed money to build the pipeline. A portion of the debt was later written off by the government.”

Paul farms mainly at two locations: Uitsig and the family farm at Kaboom where his parents live, some 70km deeper into the Kalahari. They keep a small number of game animals, but the focus is largely on dorper and white dorper sheep.

“But, I like to try a bit of everything,” Paul adds. They also have Van Rooy and Meatmaster sheep, Brangus’s, and goats. The latter are especially popular in Kwa-Zulu Natal and sold live. “The market changes continuously. During droughts farmers want fatter sheep because everyone struggles to get lambs market-ready. The fatter sheep can be used to cross with the dorpers.”

As we chat, I point out the wall clock has stopped. “You’ll see I don’t wear a watch either,” responds Paul. “I don’t work on time; I work until the job’s done.”

The tourism part of the enterprise got underway soon after the Loots’s arrived here 22 years ago. “I bought the land and my auditor said I’d paid too much. I’ll never forget. We had just returned from honeymoon. It was May – just when the tsammas begin to ripen. I started picking and told Riana she needs to make jam. Her reaction was: ‘WHAT?’. I said, yes – that’s what you need to do. And since then, she’s been cooking jam,” he chuckles.

“We decided we’re going to make it work and we’ll try everything. That’s why we try to vary the business and why we’ve let rooms since the start.”

Riana wanted to tackle something herself because the farm could get quiet when Paul was away, and the children – Marica, now a bio-technician, and Gustav, who studied agriculture – were still at school. “We started with one room that we opened to guests, and a small shop. We had a little biltong in one corner, just to see how it went. The more people started arriving, the more we realised the needs and opportunities.”

Today the shop sells amongst others game and lamb in various forms: mince, sosaties, chops and sausage. Biltong and droëwors are available throughout the year. On one of the shelves, there’s a row of containers. They’re marked kudu, gemsbok, eland and springbok. “It’s all ours, except the eland; that’s from a neighbour. We have chilli bites and spices if you prefer extra heat.”

Riana’s ginger beer, home-bakes, salt from local salt pans, sultanas from Upington and a variety of handiwork is also for sale. The variety of products is tweaked throughout the year. “June/July is a busy time,” she says. “That’s when the hunters are in the region. They shop for leather hats and bags. For the children there are marbles and sweets. During flower season in August, people visit Augrabies and the park. I also get tours needing meals too.”

In the early 2000s they began work on a campsite near the dam, which normally stays full throughout the year – a haven surrounded by trees. “With many visitors arriving without tents, we decided to erect a bush camp.”

Now there’s accommodation in the bush camp’s two neat tent-cabins, at the campsite and in the apartment adjoining the farmhouse – and there are guests every night. The most visitors usually stay one night, says Riana, because the destination is usually the Kgalagadi. “We do try to encourage people to try more of the experiences along the Red Dune route.”

When we stand to stretch our legs, Paul offers to show us around. We walk past large sheds and buildings, solar panels, and a wind turbine. The pastel colours of the late afternoon dye the sky. I hear the voices of workers and the somewhere the creak of a farm gate being closed. The smoke of cooking fires rises in the air.

At the kraals, Paul explains the reason for the various camps. Behind an old concrete wall we find Frank Shava and Skerpioentjie – a Dexter cow that provides milk for the farm, but also plays surrogate mother to a young kudu whose mother was killed on the main road nearby.

Paul talks about the goats: “Your biggest problem is keeping them near you. They generally always want to be with your neighbour, which is why your fences must be perfect. They’re tough and have few sicknesses, but they’re punier than a sheep. A sheep can have a hoof clogged with ticks, but it’ll keep walking, but a goat will have two and it kicks up a racket.”

We climb into the bakkie and head for the veld, one of us up front with Paul, the rest on the back. Minutes out, Paul’s phone rings – a popular concertina-tune: Dis ‘n lekker ou Jan.

At one end of a camp, workers have cornered a flock of sheep. I ask about the veld. “In this area you get hardeveld, like there are Uitsig. Where my parents live there’s Kalari grassland” (I note how the region’s name takes on its own particular pronunciation in these parts.)

“Every veld-type has its advantages and disadvantages and we use them as we need them. Veld-shrubs have fewer parasites and speed up fattening. We bring our lambs out of the Kalahari when it has rained. When it doesn’t rain, we do it the other way round. Then the shrubs recede quicker and the grass keeps for longer. The difference in veld means that a lamb spends its first eight months in the Kalahari before we can remove it. On the hardeveld, it’s five months.”

Other than water, Paul’s greatest challenge is wild animals, especially jacals and caracals. “It’s going to be the end of our farms,” he says. “There are many properties where no active farming happens, and the number of these animals isn’t managed. My next step is to electrify fences. We’ll eventually have no other option, but it requires intense maintenance.”

The local Farmers’ Association creates opportunities for the community to learn about the latest developments. Guests are invited and events are organised to allow farmers to interact with others in the region as well as farmers from further afield who may have found solutions to common problems.

On the way back to the homestead we stop by the bush camp and are amazed to see the body of water hidden among the trees. It’s a true oasis. Paul tells us how as a child, his father went to school by horse and cart and would often stop here. “Then they’d shoot fish with a rifle. Yes! They’d throw bread out onto the water and when movement appeared, they fired away!”

The farms in the region were laid out in 1949 with the surveying of the Kalahari. “You had to put up your own fences and everything else,” he says. His father was one of the first landowners.

Back at Uitsig’s dam there’s a bike and hiking route for visitors and a birdlist of 155 species. “There’s not cellphone signal here,” says Riana. “We’re just 50km from Upington, but it feels much further.” Other than the campsites and two tent-cabins, there’s also an ablution block for school groups and a large fire pit with a view over the dam. They put everything up themselves – even the tiles, a mix of Kalahari sand and cement.

“We’ve had a small wedding here, but you really have to be well kitted out for it,” she says. It’s important to both of them to be directly involved with the guests. “Often you arrive at a place, collect the key and that’s the last you see of the owner. When I arrive here, I read the situation – does the guest want a chat or not. If there’s no interest, I leave,” says Paul. Of course, that means the Loots’s can’t ever be away, because they want to be here to receive visitors.

In the evening, Paul makes sausage for the braai. He has a meat processing room with a small, walk-in coldroom. The wonderful smell of coriander hangs thick in the air around slabs of biltong drying in the darkness.

His meat is slaughtered in Upington and he can’t keep many carcasses here. There isn’t enough power for larger coldrooms. He talks about the role of tourism at the farm and how Riana manages that side of the business. “It’s her business. It also keeps the children at school and in university.” He explains: “We’d like to expand tourism here. Labour remains a challenge, but there are many opportunities just waiting.”

We move to the table for dinner. The curtain of dark closes gently beyond the stoep where the noise of night insects is an audible racket. It’s a beautiful evening. Riana serves a biltong soup entrée, each plate decorated with twig of organum from her garden. It’s followed by lamb chops, skaapstertjies and springbok fillet. “Here in the Kalari, we’re meat-eaters,” she says.

Paul removes the sausage from the braai and offers it to us, straight from the grid, “because cold sausage just isn’t lekker”.

We sit chatting until late. Beyond the palm trees is a starry display few city-dwellers have ever experienced. The view for visitors to Uitsig however, comes standard.

Thoroughly mix the ingredients. Feed it through a sausage machine. Preferably use a natural casing.