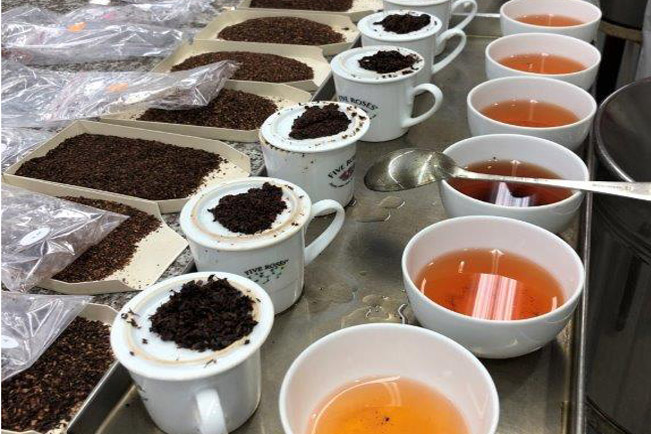 Tea lovers recognise a good cup of honeybush tea when they drink it: It has just the right aroma, colour and taste on the palate. But how do you distinguish a high-quality brew of honeybush tea from a mediocre one? And, how do you describe and quantify the differences between brews in a way that improves quality control in the supply chain, from crop to cup?

Brigitte du Preez focused her PhD study on these questions. She will receive her degree from Stellenbosch University’s (SU) this week. She completed her studies in the Department of Food Sciences (part of the Faculty of AgriSciences).

Her study forms part of the Agricultural Research Council’s (ARC) research on honeybush tea, in which SU researchers are participating.

Du Preez’s research shows it is possible to provide a sensory ‘quality seal’ for different batches of tea. The sensory qualities of honeybush tea — including its aroma, appearance and taste — are crucial in distinguishing between high- and poor-quality tea products, she says.

“Honeybush tea has a recognisable fragrant floral, apricot, caramel and fynbos-sweet aroma and sweet taste,” Du Preez explains. “Its characteristic sensory profile has been mapped and can be used in quality scoring of samples of different production batches of the tea.”

The honeybush tea industry has rapidly grown over the past two decades from a local cottage industry to a participant in the global herbal tea trade, one of the fastest developing segments of the hot beverages industry. But there is tough competition in the market, and some challenges to overcome in expanding the industry’s market share.

Until now, there was no standardised set of measures to evaluate the sensory aspects of honeybush tea. Commercial processors, packers and marketers all use different ways to assess and communicate the sensory quality of the tea. South African government regulations also do not specify sensory standards for honeybush tea. As such, tea of variable quality is released onto the market.

Du Preez’s work could help address some of these challenges. She developed a user-friendly, quick and reliable quality grading system on the basis of input from role players in the industry. This novel system provides a scientific way to evaluate and describe the sensory characteristics of different tea batches.

Du Preez used a large dataset as a foundation for her research. This dataset was compiled from the sensory, colour and turbidity (clarity) analyses of 585 tea batches that represented high to poor quality teas. She focused her efforts on three honeybush species (C. intermedia, C. subternata and C. genistoides) that are considered commercially important.

“High-quality honeybush tea has a reddish-brown colour, a high intensity of floral, fruity and sweet aromas, with sweetness and some astringency on the palate,” Du Preez explains. “Poor quality tea is characterised by an insipid overall sensory character on the palate, high intensities of taints, including ‘smoky’, ‘medicinal’ and ‘musty’ flavours.”

Du Preez’s grading system and supporting tools can now be used throughout the supply chain. These tools include a revised aroma lexicon and wheel that visually maps the aroma attributes of honeybush tea and their intensities, as well as a scorecard and colour reference card for ease of use in routine quality control. She also tested two rapid sensory methods for screening of a large number of tea batches.

The novel application of these methods in sensory quality control would aid tea packing companies in the rapid assessment of tea for batch blending purposes, as well as researchers involved in honeybush plant cultivation.

The aroma references can help honeybush processors and marketers understand honeybush sensory vocabulary (such as ‘fynbos-floral’) and taint terminology (such as ‘medicinal’ and ‘smoky). This understanding will equip them to communicate unambiguously through means of these standardised terms, and simplify the sensory quality control process.

Finally, the new system and tools could also form a basis for regulatory control in terms of certification and export control.

Sensory quality control is critical to supporting the sustainable growth of the industry, Du Preez believes. “It is also needed to ensure that good tea quality is not forfeited during the breeding of ‘superior’ plant material within research.

“As demand for honeybush tea grows, all production batches should meet optimum quality standards. Only quality batches should reach the market,” she concludes.
Du Preez’s study leaders on this project were Prof. Lizette Joubert from the ARC Infruitec-Nietvoorbij and Dr Erika Moelich and Nina Muller from SU.

Her research was funded by the Western Cape Department of Agriculture through the South African Honeybush Tea Association and the Department of Science and Innovation (DSI).

Honeybush tea is a South African herbal tea brewed from the fermented leaves and stems of the honeybush plant (Cyclopia spp.). It is named after the honey-like smell of its bright yellow flowers. This endemic fynbos shrub grows naturally in the Western and Eastern Cape, in an area ranging from Piketberg to Port Elizabeth.

The indigenous Khoi San people of the Western Cape were probably the first to brew a drink from wild-growing honeybush plants, likely for medicinal purposes. Commercial honeybush farming remained very limited until the early 1990s.

There are currently 23 known species of honeybush in South Africa. Each of these species has a typical distribution in nature — some preferring sandy coastal plains, others flourishing on cool, damp mountain slopes. The different species have slightly different flavour profiles, and tea processors often blend two or more species to ensure a consistently delicious product.

Honeybush tea is caffeine-free and has a low tannin content, with the added benefit of high levels of specific natural antioxidants.

Approximately 350 tonnes of locally processed tea products were exported in 2019, including to countries such as South Korea and Japan.