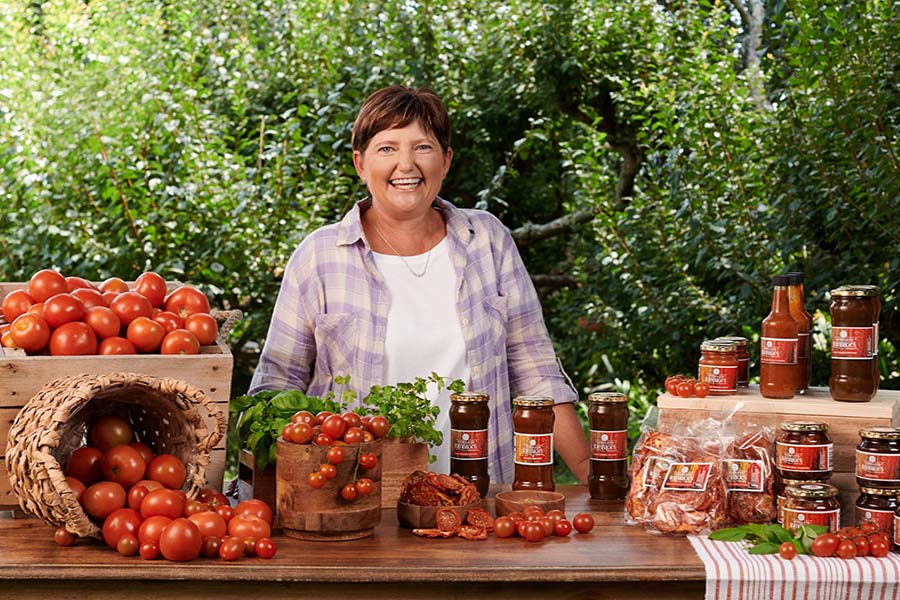 Eighteen years ago, Anja Fourie from the farm Driefontein in the Free State had an idea to start growing tomatoes to supplement her income. Despite many obstacles, that humble venture has flowered into a thriving small business – and created 18 jobs in a remote part of the country with extreme poverty and unemployment levels.

“When I started, I knew nothing about tomatoes,” says Fourie. The idea for Timeless Tomatoes came during a time of introspection and prayer. “I didn’t just want to be a farmer’s wife; I wanted to make a difference. Then the tomatoes crossed my path.”

She was the first person to grow this particular crop in an area of the province dominated by sheep farming and the challenges were many, including a lack of capital; soil imbalances and dying plants; and – because of the farm’s isolated location – a lack of access to industry experts.

“I literally started with just a savings account – getting financing was very difficult,” Fourie recalls.

But she persevered and, from starting off on a small patch of land with three drying racks, she now has 48 racks covering about two hectares. Today, Timeless Tomatoes produces 120 tonnes to 150 tonnes of high-quality tomatoes a year.

Timeless Tomatoes was recently selected as one of three deserving small businesses to be supported in the second phase of insurer Hollard’s Big Ads for Small Business campaign to enable better futures through boosting small, medium and micro-enterprises. Hollard is sharing commercial airtime worth R1-million with each of these enterprises on DStv channels, and providing digital media exposure across multiple platforms.

Early on in her venture, Fourie decided to produce tomato products alongside the fresh produce. “I started making jam and chutney in my kitchen – with just one pot,” she recalls.

Two years ago, she finally had the means to have a small factory built on the farm. Here, about 10% of the annual crop is processed, either as sun-dried tomatoes, or as tomato chutneys, jams, salad dressing and pesto.

In 2013 and 2014, the Department of Trade and Industry invited Fourie on trade tours to India and the Netherlands. In 2018, she received a grant from the Small Enterprise Development Agency that enabled her to buy much-needed equipment (she had been improvising for years).

With the prize money, she built a house on the farm for her workers. She was also able to improve her cooling facilities and put up a structure for the sun-dried tomatoes.

Creating jobs and sharing knowledge and skills are important to Fourie.

“Our workers come from the Bethulie, Venterstad and Burgersdorp areas, where people are very poor. With our male farmworkers having the opportunity to learn all the processes and skills, from planting and harvesting to sorting and packing the tomatoes, I also wanted to empower women by upskilling them.”

She now has four women employees working with her in the processing factory, and enjoys transferring her jam- and chutney-making techniques to them. “All our employees are young people between 20 and 35,” she notes.

Over the past 15 years, she has also supported a local woman in running her own tomato micro-enterprise in her community.

In February this year, Fourie received her Global Food Safety Initiative (GFSI) certification, something she says is “difficult and expensive to get”. Retailers and buyers globally trust GFSI-recognised certification as a mark of the highest standards in food safety, allowing food enterprises that hold these certificates to access all corners of the worldwide market.

BREAKING THROUGH THE BARRIERS

There are many barriers for small businesses in South Africa, says Fourie. “If I knew at the beginning what I know now, I would never have started. Products must be tested. Labels must comply with set standards, and there are issues around barcodes. Often, I feel that once I’ve climbed one hill, the next mountain looms in front of me.”

These days, her husband Frans largely handles the fresh tomatoes side of things, while she’s in charge of the processed products, which are now available across the country thanks to online ordering and courier services.

Her dream is for Timeless Tomatoes to become a well-known brand across South Africa. “I believe if an opportunity comes your way, you must grab it,” she says. “I see my business as more than just tomatoes. It’s also about growing as a person, learning new things and meeting new people.”

HER ADVICE TO OTHER ENTREPRENEURS?

“Just start. Nothing will come from having an idea and not acting on it. But start small. Learn from the experts, and make sure you have a unique selling point.” Her sundried tomatoes, for example, are differentiated from others on the South African market in that they are sliced in large discs rather than halved.

“You have to have a dream,” adds Fourie, “and you need to pursue it.”