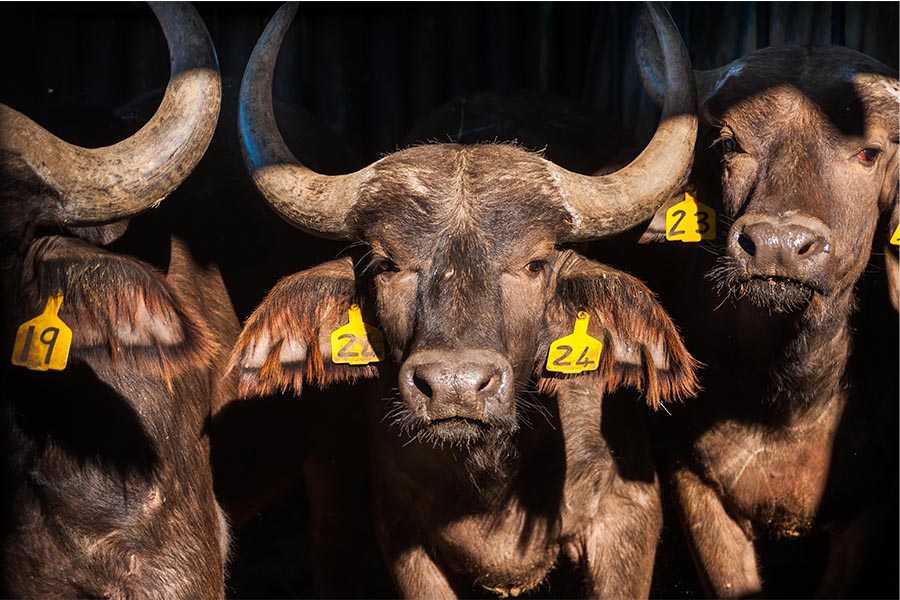 When James Somers Kirkwood, an auctioneer from Port Elizabeth, visited the Sundays River Valley in 1877 to auction off one of the area’s original farms, the valley was dense with spekboom with a few cattle and sheep farms scattered throughout. Kirkwood had a vision of irrigated fruit orchards and decided to buy a farm on the spot. He started establishing irrigated orchards but no one bought into his vision and shared his enthusiasm for formal irrigation. Kirkwood died in 1889 – mentally and financially broken – but history would prove he was simply ahead of his time. In the following century, his vision of a valley filled with fruit trees came to fruition. But it didn’t stop there. Thanks to the Addo National Elephant Park and the increase in game farms in the valley, the Kirkwood area is now also a popular tourist destination.

We enter through an exceptional avenue of fever trees, their bright green barks shiny in the early morning sunlight. The avenue guides us to Kududu guesthouse on Nooitgedacht farm, where we’re greeted by the Potgieter family at Laslappies Farm’s office. “I planted the fever trees quite densely in 2008 as I wanted to see them grow in my lifetime,” says 69-year-old Hermanus Potgieter. “They grew so fast that they’re now too close to each other.”

As the name “Laslappies” – Afrikaans for patchwork or quilt – indicates, the family business is spread across various farms and lodges in the Sundays River Valley. “We farm here and there,” says Danie van Rensburg, Hermanus’s son-in-law, who is in charge of the buffalo and sable breeding programs. His wife, Anri, partly manages the farm and is also involved in the running of Kududu guesthouse, one of Laslappies Lodges’ three guesthouses. Her brother, Rossouw, divides his time between farming and his dental practice in Kirkwood. It is impressive that this varied and extensive farming operation started with just 11 acres four decades ago.

Hermanus was born in Kirkwood and studied to be a teacher before obtaining his MBA in Pretoria. Whilst teaching, Hermanus bought 11 acres of land in the Kirkwood area from his father. He continued to teach and did steelwork on weekends to boost his income. This enabled him to buy more land until he could afford to farm full-time in 1988. Hermanus and Danie bought Nooitgedacht in 2007. It currently consists of a 231-hectare citrus farm and a 300-hectare game farm. In total, Laslappies Farm has 650 hectares of citrus, consisting of lemon (55%), navel (20%), Valencia (18%) and soft peel exotic varieties (7%). All citrus is delivered to the Sundays River Citrus Company.

With the Addo National Elephant Park on their doorstep, the business is very focused on tourism. As Laslappies grew with each patch of land that was added, Hermanus involved his children and son-in-law. Anri and her husband, Danie, previously lived in Jeffreys Bay, where she was a teacher and he was in the police, until their arrival at Nooitgedacht in 2007.

Laslappies Lodges include Kududu, Addo Dung Beetle Lodge and Beyond Cui Bono? in. The unusual name Beyond Cui Bono? is from the Latin cui bono?, meaning ‘for who to gain?’ “Then we just made it Beyond Cui Bono? with a question mark, because the guesthouse is there for everyone’s benefit – the guests, owner, workers and the environment that we beautify,” Hermanus explains.

Nooitgedacht is not a hunting farm. “With the drought we haven’t even hunted for our own pot in the last four years,” says Danie. When the guesthouse wants to serve kudu biltong, they buy it from the butcher in Kirkwood. The farm used to have only cattle and sheep until the family decided in 2010 to diversify and add wildlife. The buffalo and sable breeding animals are kept in camps, while others run wild for guests’ viewing pleasure. With citrus, accommodation, the game farm and the breeding of sable and buffalo, Laslappies is as colourful and operation as the name implies.

Danie explains how they decided to start breeding with the notoriously ill-tempered and dangerous buffalo in 2010. “At that point, many farmers focused on colour variants such as golden wildebeest and black impala, but it is every hunter’s dream to hunt an African buffalo,” says Danie. They began breeding sable about three years later, which was rare at that time. “But now there is an abundance and the prices have fallen tremendously,” Danie says.

The first buffalo bull and cows were purchased from Addo National Park because they were disease-free. Since then, bulls with an East Africa bloodline have been acquired, such as the current bull, Pharaoh, with a horn length of 47cm. Suffice to say that Pharaoh cost the equivalent of a king’s ransom. Buffalo are known for their unpredictable and deadly temper. From Kududu’s porch we have a sweeping view over the buffalo camp. I wonder aloud whether these animals have become a little easier, thanks to all the human interaction. No, everyone agrees, it’s not even an option. “They are very dangerous and a cow with a calf is the worst,” says Danie. Later, as we visit the buffalo and sable camps, Anri points to a thick steel gate and tells how an enraged cow once ran straight through one of the reinforced steel gates. “You definitely don’t come near a buffalo unless it’s been darted,” says Danie.

Only veterinarians are allowed to anesthetize buffalo and this is only done to draw blood, for labelling and the insertion of chips. Danie does however administer medication by means of arrow darts fired from a vehicle or a safe platform. With an inter-calving period of 12 to 14 months, it is ideal that cows calve once a year. At nine, Pharaoh is in the prime of his life. “The insurance to transport him from Kimberley came close to R200 000 – which is just slightly more than the cost of insuring him for a year – so we opted for the annual plan,” Rossouw says. When a passenger can break through steel gates and crumble bakkie doors, the high premium makes a lot of sense. “After 3.5 to 4 years a new breeding bull is brought in to avoid inbreeding. So, when the time comes, we will trade Pharaoh with another breeding bull or sell him,” says Danie.

We first visit the much calmer sable camp. The herd of about 70 consists of a bull, Black Jack, with cows and small animals. In addition to his massive horns, Black Jack can be identified by his dark hide. The Potgieters bought this famous bull at Valley Venture Stud in Vryburg. A fifty-inch bull can cost up to R1 million. Whereas buffalo live for 20 to 25 years, sable live an average of 15 years. At thirteen, Black Jack still fancies himself as a stud but his stiff gait suggests his duties are taking their toll.

Due to the abundance of sable on the market, the price of a cow has dropped from R240,000 to just R12,000. “And it costs you R6,000 a year to feed her,” says Danie. Nooitgedacht also has 40 hectares of pasture with kikuyu, Lucerne and red clover that serve as permanent pasture for the buffalo. The sable herd is fed a mixture of purchased pills, teff and Lucerne.

The vast majority of Kududu’s guests are European, mainly from Germany and Holland, and they come to visit the elephant park. Surrounded by citrus orchards and wildlife, with a Jacuzzi, pool, spa and dinners on request, their guests are spoiled for choice and comfort. As the name implies, it’s a place to com and enjoy kudu and “dudu”, the Afrikaans slang term for napping.

“I was a bit hesitant at first,” Danie confesses, when I ask about working with his father-in-law. “But I always say my father-in-law is 70 years young in spirit. Laslappies is doing so well because it is open to innovation – in terms of human relations and technology,” says Danie.

Hermanus launched the first empowerment project in the Sundays River Valley in 2000 by selling 75% of his farm, Luthandu, to its workers. “We didn’t really know about land distribution yet, although the government had raised the issue. So, we decided to see what we could do,” he says. With the help of a legal expert in Stellenbosch, Hermanus drafted a plan to submit to the government. “We were also part of Fair Trade, which helped a lot. The government subsidized 50% of the transfer and the balance was borrowed from the bank,” he says. The loan was based on the number of trustees at that time. “It included all my workers and their spouses, about 70 trustees in total,” he says. The agreement was that Hermanus would execute all managerial decisions for the first five years.

“I took the decisions and they could question me. In this way, I trained them. After five years they were able to take over the shares but they asked me to stay on board. The process taught them that the commercial farmer is genuine in what he wants to achieve and does not have a hidden agenda,” Hermanus says. He later sold his 25% stake to the Sundays River Citrus Company and the project is still thriving. “They realize the value of technical assistance and the support of a serious company. They have recently applied for loans to expand and develop their enterprise.”

Danie tells of Hermanus’s travels to Helsinki with two managers from Luthandu. “The managers only knew the fruit’s production cycle from the tree to the box. My father-in-law took them to Helsinki so they could see what happened to produce from the moment it left the farm, until it reached the overseas consumer,” Danie explains.

Hermanus is enthusiastic about the future. “This is a thriving valley that has been producing high quality citrus for many years. If citrus folds, it will fold here last.” Given the multiplicity of Laslappies farms, this creative family stopped relying on any single industry a long time ago.

Farm to fork destination at the V&A Waterfront opening in DecemberThe V&A Waterfront’s visionary and ground-breaking plan to develop a 3600 integrated farm-to-fork food...November 8, 2020

Demand for Rooibos beauty products continues to growA growing preference for natural products free from chemicals, along with a...October 26, 2020