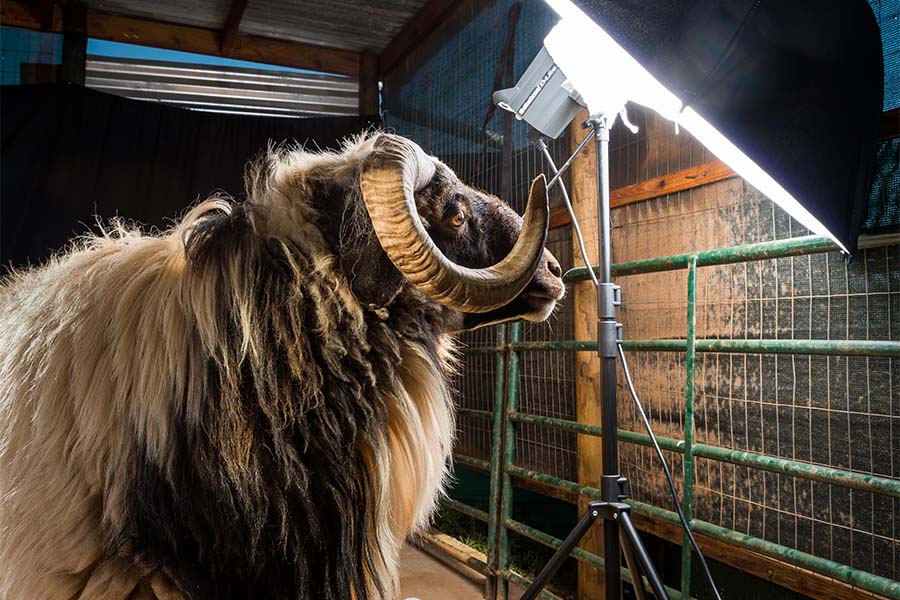 “I wanted to farm my whole life – I attended an agricultural school,” says David Wright, “but my family did not own farms and I thought I would have to let that dream go. I married and started working (I sold business software to commercial printers).” Since then almost three decades have passed and today David and his wife, Irmgard, are the proud owners of an Awassi milk sheep herd.

Irmgard is an optician and had one of the largest practises in Johannesburg while also lecturing at the University of Johannesburg. After the birth of their first daughter, the couple soon realised how difficult it is to find a balance between both of their careers and bringing up their child. David’s dad died early, when he was only five years old. Therefore, it is very important for him to spend as much time as possible with his daughters and to be available to them. He did not want them to ever be alone or to worry about someone not collecting them.

“I was very fond of my two daughters,” David says. “So, we decided that I will change to freelance work and raise the children. But as soon as they have left the house, it is my turn!”

David has always dreamt of farming, but never thought they would ever have enough money for that. “In English you always say: ‘Let’s go live in the country,’” David says, and that is exactly what they could eventually do. His dream became reality as David had been interested in milk sheep for a long time. David and Irmgard travelled from town to town from Johannesburg and stayed in Plettenberg Bay for a while. For many years he also did research on the milk sheep industry. David says that he read a lot about milk sheep, talked to other people and even travelled overseas to gather more information about them. The decision was not taken overnight. They wanted to be close to their market and eventually decided on a centrally situated town, Barrydale.

“I am fond of dairy and I wanted to milk something,” David explains. “Sheep are more manageable than cattle. And because we started late, we had to produce a niche product – one cannot compete with all the established farmers. At present there are only about ten farmers milking sheep here in South Africa.”

As some cattle races were developed for milk production, the same goes for milk sheep. According to David the most well-known are the Lacaune from France, the East Friesian from Germany and the Awassi. Awassis were bred in the Middle East and is still the most common race in that area. “People milked sheep long before we milked goats or cattle,” David said. “The reason why we stopped with sheep, is because it is not that easy.”

Although Awassis were milked historically, this unimproved breed are poor producers. Breeders created new bloodlines, producing a lot more milk, through selection. David’s ewes produce on average 450 millilitres when they are milked in the mornings. “We wanted to stay as natural as possible, and only milk once a day. At night we separate the lambs from the ewes. Then we milk in the morning and after about an hour, when the ewes’ udders are filled with milk again the lambs go out for the day with their mothers.”

David and Irmgard have a portable DeLaval milk machine working off a generator. On a good day it takes only a few minutes to milk an ewe. “But they can also decide: ’Today I don’t feel like it!” Irmgard says. “Then they don’t release their milk and you get nothing. They like routine. They don’t like it all if you bring a stranger along – then they jump around and don’t want to have anything to do with providing milk.”

Now they are more focussed on breeding their herd to be able to later produce more milk and other products.

David explains that there are no pure Awassis in South Africa. Three purebred rams from an improved bloodline was imported in 2012 by Elmarie van Aswegen. Elmarie was the first person to breed milk sheep in South Africa by having Ronderib-Afrikaner, Afrino and Merino sheep inseminated with imported East Friesian semen. Elmarie used the Awassi rams to get her milk sheep more rugged.

David and Irmgard’s ewes were up to now artificially inseminated with frozen semen supplied by Elmarie’s Awassi rams. “Those rams have died in the meantime and the semen is all you can still get. We breed back into that bloodline to produce an Awassi sheep. But I now realise that it would be better for me to have a multi-purpose sheep – one that can produce wool, milk and meat. The Awassi only provides milk and meat.”

David therefore started his own selection programme. And with good stead he boasts about three young rams he kept back for further breeding. They all have strong Awassi characteristics – from their burly, characteristic heads with their graceful horns to their well-developed fat tails. Their backs carry a full wool cover and the long legs make them look just like the sheep depicted in the Old Testament.

“At this stage I have almost 100 sheep,” David says. “I had more, but with the drought had to get rid of a few. And when you build a bloodline you need to be aggressive in your selection.” The ewes are dry now and the plan is to inseminate them later in March. The gestation period is approximately five months and they start to produce milk again after they have given birth.

Irmgard makes yogurt and cheese from the sheeps’ milk. Large glass jars are filled with tasty yogurt and sold to the public in their town. She also works with a cheesemaker to develop different cheeses, including feta and haloumi, both traditional Greek and Turkish sheep’s milk cheeses. Irmgard believes that food is an important of being. “To prepare food, to eat, sit together around a table – that is our culture. It is a family thing and these days families do not eat together anymore and they also do not cook with each other. Children should learn to cook and sit around a table, put the cellular phone aside en to chat.” These cheeses and yogurt can be used in such a way to have families sit together again and to discuss these interesting products.

“When you take on something, you must have a passion for it, otherwise it simply will not work,” David believes. It not always easy. When they moved to the Karoo initially, they though there was enough water in Barrydale. However, it was not useable by David and Irmgard. When you do not have enough passion for the things you do, events like this will get the better of you. For this couple it was not the case and one can see that this road with their Awassi herd will be a long one.