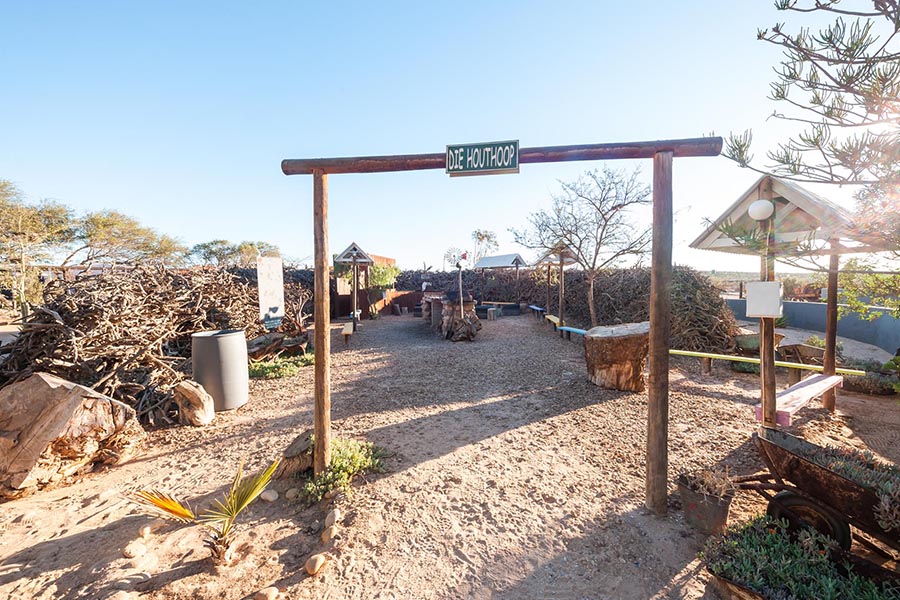 I examine the satellite image of our destination. Google has dropped a lone digital pin to indicate a location. The few gravel roads carved in dead-straight lines across the barren landscape suggest the roadbuilders may have thought your only reason to be here would be to pass through as quickly as possible.

Arrive at Steenvlei Farm – home of Die Houthoop (the woodpile) – and the realisation dawns again how wrong assumptions can be. We turn off the main thoroughfare onto another unswerving track that takes us through a gate that reminds me of 60s TV show The High Chaparral. Like the sparse farmhouses we passed earlier, a wind pump and few locks of greenery are the only sign of life.

To describe that which eventually greets us as an oasis is probably cliché, but it is truly what the farmhouse and its colourful cottages are. The tourist destination was unique for years in this far-flung, scantly populated environment. The Northern Cape has South Africa’s smallest population per square kilometre, and the figure for Namaqualand is even less. This is where Die Houthoop lies.

The yard hound is with us first, closely followed by Jackie Moolman, a trained chef. Her official title is Manager, but we quickly come to appreciate her versatility and how well-suited she is for this remote place.

She helps us to our rooms then shows us around. There are 24 cottages, each with two single beds and small, shared bathrooms. Alongside is a patch of lawn divvied into 10 campsites with electricity connection points. There are also 10 en-suite rooms as well as the woodpile where it all began.

“[The owner] Willem’s father stacked dry wood and red vyebos that grew on the farm in 1954,” says Jackie. “They needed a shield from the wind while baking bread, making soap and preparing food and there it remains to this day.  Now, we braai here and serve open-air buffets for visiting groups.”

Before she can continue, our host appears, damp hair suggesting freshly showered, at the homestead’s front door. He offers his hand and an introduction: “Willem…” For a few minutes we stay there, under the pergola, making exploratory chit-chat. Photographer Mike and I do most of the talking although I don’t know whether Willem is just a large man of few words or just suspicious of “newspaper people”. He suddenly invites us in; all palpable discomfort vanishes.

Inside, he lays out the story of Die Houthoop – a brilliant idea sparked by his wife, Veronica. “She decided to launch the open-air meals at the woodpile in the early 2000s. This was a couple of years after we were married and moved to the farm because my father was ill. There was a drought and the open-air concept would help us with extra income.”

Veronica and Willem were both raised in the region. Willem worked as a diesel mechanic in Alexander Bay when they met. Veronica had moved to Namaqualand from the Cape with her mother and sisters in 1979 when her father, a German from Namibia, died. While managing Die Houthoop, she also launched and ran a community newspaper, the Namaqua Kletz; taught in nearby Kleinzee; and, established a welfare organisation, Daisy Ubuntu Charity, to help the handicapped and disadvantaged children. The addition of wheelchair ramps from the street to the pavement across Springbok was among her initiatives.

The main source of guests to Die Houthoop was originally people involved with operations at mining company De Beers at Kleinzee, 15km away. “We hosted many mine-related people and consultants. There were no alternative restaurants except at De Beers. I was sceptical when Veronica launched, but it quickly became successful.”

FROM CATERING TO ACCOMMODATION

“Not long after, we received a request for accommodation. That’s how we started letting a room at first. From the money raised by the food and accommodation, we then erected three huts. Later, a company sought lodging for 12, for three months. Plus, they needed it within a month because they’d been contracted to lay cables in the area. I was off to Henties Bay, but Veronica just said it wasn’t a problem – I could leave, but the cottages had to be finished! So, I worked day and night. The guests moved in and from there the cottages only multiplied.”

In no time Die Houthoop crawled with people and activities – the homestead’s ceiling is testament to it. A collection of hundreds of caps, donated by a myriad of workers, spilled over from Willem’s personal bar where they hung, to the braai-room on the stoep. “I’ve already taken many down,” he says.

The influence of the mine was so substantial on the local economy that a festival, complete with major sponsors and a variety of stalls, was occasionally held at Die Houthoop.

“This Houthoop-business led me to change my entire perspective of our farm,” says Willem. “When I first arrived here, I farmed on my own. I spent a lot of time on the road ferrying the sheep between summer and winter pastures in the Boesmanland. With the success of Veronica’s meals, it all became too much. We worked late almost every night and Veronica had to do everything by herself. It was worth the effort, but I had to be here to help. I decided to sell the Boesmanland property to my brother; now we farm together.”

The largest component of the farm’s income during the year was derived from tourism and Veronica’s catering. But one day, they felt a change in the wind. De Beers had started to scale down until all mining activity was concluded. The character of Kleinzee changed and grew quieter. “Today there are only a few mine people left and every second house is a B&B,” says Willem.

Amidst it all, Veronica was selected as a DA MP and she’s in Cape Town fulltime. It’s far from the farm and closer to their children. Wian is a civil engineer and Joha is a student in Stellenbosch.

Responsibility for Die Houthoop over the past few years has largely fallen on Jackie. “People refer to me as the boss of Die Houthoop, but I farm,” Willem laughs.

Jackie was born in Odendaalsrus. After school, she held various jobs including that of guesthouse manager before she graduated from the ICA Chef School in Stellenbosch. “I’ve worked here before but got a call from Veronica one day. She said: ‘Jackie, I’m off to the Cape and need you on the farm now!’ So, I came.”

The enterprise has changed significantly since she settled in. The tourism contribution is smaller, but remains steady because of people working in the area and outdoor enthusiasts exploring the region.

Easter and December are especially busy times, with Die Houthoop being a magnet for group reservations such as reunions, weddings and team building.

Seafood makes a regular appearance on the menu because the ocean lies just eight kilometres from the farm. Willem often goes fishing in his boat – it’s his big hobby. It’s not what one expects, because the sea isn’t visible from the farm.

“We often served crayfish, years ago when it was plentiful, but it has become difficult to source. Now pot-bread, mussel soup, fresh fish, salads, and sweet vegetables are our stables,” says Jackie.

“We originally only had Dorpers, but later acquired the Damara-Afrikaner cross sheep. Now that’s a good animal. If you have 100 pregnant ewes, you can prepare for a lot more lambs,” says Willem.

“The Dorpers make poor mothers. I’m not crazy about them. We got the opportunity to buy the cross-breeds; we wanted to speculate, but they produced so many lambs we changed our plans.”

“The area used to be one farm of 36 000 ha. It was sold at the beginning of last century to De Beers with the option to mine. The owners held onto one morgen, but where it lay was never specified. When my father bought this land in 1954, it was a portion of the morgen with pasture rights across the rest of the farm,” he explains.

The farm has had its share of new challenges over the years, including a steady decline in annual rainfall.

He says, at the time of writing, that he had 18mm the previous year. “How do you farm sustainably with that? We’re fortunate in being able to do rotation-grazing by moving the animals to Boesmanland.”

There are wind pumps at most of the camps on the farm. On one portion near the sea that he leases from Eskom however, he had to transport water. “It’s a battle,” says Willem.

“Last year the veld was so poor in Boesmanland that we took the sheep to the sea-camp. You can’t believe how the animals recovered; it probably has something to do with the humidity along the coast that promotes plant growth.”

Another challenge is the wild animals – jacals, porcupines, caracals and feral dogs.

“The spines of a porcupine shield the animal from the effect of an electric fence. They’re the one’s who dig under the fences, giving other animals access. Jacals and caracals breed easily, especially on farms where pest control is now just a memory. Many farms are vacant during the week or indefinitely, and maintenance dwindles.”

Last year, feral dogs were responsible for killing 34 of Willem’s sheep. “They come from surrounding settlements and form packs with other dogs. The damage they cause is terrible.”

Nonetheless, Willem persists, but “it has become expensive”.

It’s fortuitous that the tourism part of the business still has good opportunities and remains sustainable. It has become increasingly common for farms to supplement income with supplementary businesses. “In our case, agri-tourism has been a workable solution. The farm is centrally located. Guests enjoy staying here especially during flower season, for which Namaqualand is renowned.”

They also enjoy the 4×4 routes and the simplicity of the pristine environment. The mine may well have scaled down, but there remain big plans for the area in the field of energy generation. Land close to Kleinzee has long been identified as a potential site for a new nuclear power station. The Northern Cape is also ideal for sun and wind-power projects. There are plans afoot for the construction of several wind farms near Die Houthoop.

As we talk about farming, Willem says things “can’t go on like this”. The drought is just one of the factors dampening his spirits – wild animals and government are others. But he feels differently about Die Houthoop: “A guy needs a backup,” he says. “This place is our oasis.”

Farm to fork destination at the V&A Waterfront opening in DecemberThe V&A Waterfront’s visionary and ground-breaking plan to develop a 3600 integrated farm-to-fork food...November 8, 2020

Demand for Rooibos beauty products continues to growA growing preference for natural products free from chemicals, along with a...October 26, 2020