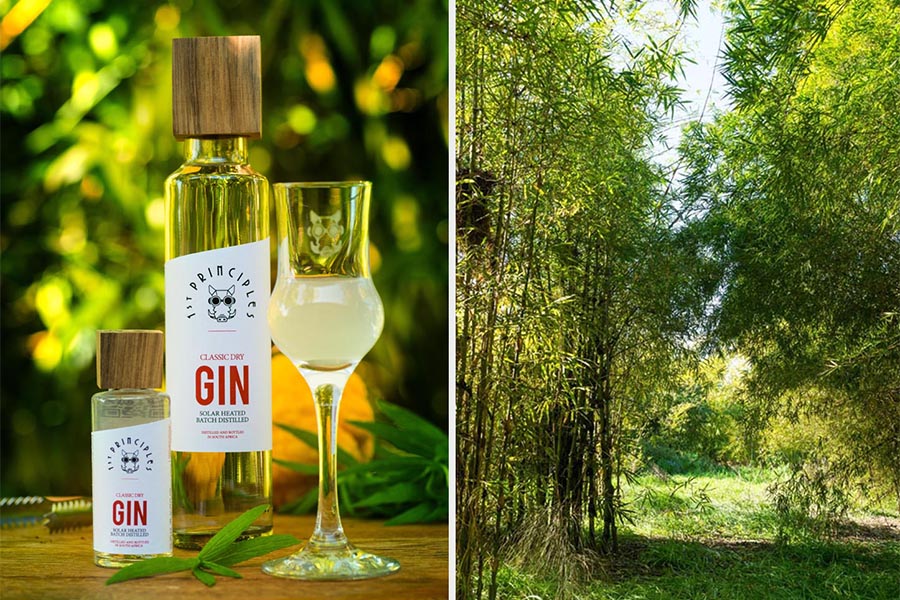 A Vredendal farm’s broad interests and search for new opportunities led to the establishment of a distillery run on solar power and test site for bamboo.

Joubert Roux and his brother, John, farm at Groenhoek on the Olifants River. The river is an artery in these barren parts and has long been at the heart of especially grape and raisin farming in the Namaqua West Coast region.

Grape, potato, and pumpkin crops are handled by John while the small distillery and adjoining bamboo plantation are Joubert’s baby.

Joubert had a long career in the construction industry before he got involved in farming. The Vredendal native has amongst others served on the board of the Namaqua winery.

The idea for the distillery also came a long way, he says. “Years ago, we acquired a sketch diagram of a French Prulo pot still and we wanted to set one up, but it was the 1980s and just not accessible to small distilleries.”

When the laws began to change, the brothers’ interest was sparked anew. He leads us from his office where the old sketch still hangs on the wall. There are also family photographs; a display of botanical ingredients; and, a map detailing solar variation across South Africa.

“I dug up an old copper still from my mother’s garden that was being used for pot plants. It was full of holes and had components missing, so I sent it off to a coppersmith in the Cape to fix,” says Joubert.

Today, it’s this very pot still that stands in the First Principles Distillery. The new red-brick building is surrounded by trees and lush greenery. Tables and chairs are arranged outside and over weekends this is the place to visit, where rows of nearby bamboo cast their cool shadows in the heat of day.

“The metal stamp on the side of the equipment still shows its original licence number,” he points out. “I want to look into that history; it could be at least 150 years old.”

More stills line the walls: a small one from Portugal that allows him to experiment; a column-still from China; and, a small vacuum-still, which Joubert designed and built himself.

The enterprise that opened in April has an unusual approach to the “craft” spirits industry.

“The recent, unprecedented growth in distilleries that specialise especially in gin – made us realise it’s useless to be traditional,” says Joubert. “As a result, we decided to pursue carbon-neutrality and be as local as possible.”

The result was possibly the only small distillery run predominantly on solar power. “Heating is a substantial input cost when making spirits,” he explains. “You can’t get around it to produce enough high-proof alcohol.”

“We have a large geyser on the roof to generate heat that circulates through the building and to the equipment. We also have a solar PV-system on the roof, which generates power. Together, they’ll allow us to achieve our goal a year from now [at time of writing].”

All botanical waste is composted. Grey water is used for the toilets while the bamboo is irrigated with waste black water.

This eco-friendly strategy is also applied elsewhere in the company. Where most of the country’s producers import bottles, Joubert’s are made locally.

“It just doesn’t make sense to import a kilogramme bottle from France, drive it to Vredendal only to drive it back.”

Water used in diluting the gin to the legal limit of 43% comes from the farm, and even the tonic that he presents at tastings is made in nearby Citrusdal, by Cederberg Aqua.

THE BIRTH OF A BRAND

A small block of wood that fits over the screwcap of each bottle and gives the packaging its own identity, is made in Vredendal from Acacia melanoxylon (Blackwood) – an invasive alien species.

“The only plastic in our packaging is inside the cap and serves to seal the bottle,” says Joubert.

Naturally, he’s had his challenges. Few enterprises are born easily and Joubert is another witness to the fact. “I gave myself three years to build the brand, but never realised how personal it would be; you have to drive everything including the tastings and functions, in addition to being the face of the trademark.

“Things also change as you learn.” Apart from the many responsibilities associated with liquor licence application (which took him three years), they discovered halfway into construction that the roof of the distillery was too low and a new plan had to formulated, fast. The recipe development was an 18-month process, about which he says: “I have new respect for the Israelites, because it was like being lost in the dessert.”

The distillery’s logo features a bush-pig with an old leather helmet and goggles “because I wanted something quirky and associated with Africa”.

The name emerged from a philosophy of producing from scratch. “Our products are made from first principles. Where many producers buy in alcohol and simply add botanical elements, we ferment and produce alcohol for the pot still ourselves.”

Outside of juniper berries, rooibos and buchu, botanical additions to the gin that he needn’t buy, he selects from his own garden. There’s lemongrass, rose geranium, eucalyptus, mint, lemon (zest and leaves), basil, thyme, wild feverfew and curry-leaf. He wants to expand this collection to eventually include even his own juniper supply.

This fascination with plants also lies behind Joubert’s other young project. Beside the distillery is 10ha planted to bamboo, and specifically 56 varieties. Joubert takes us into the rows, which tower high above us. Beneath our feet, their cast-off leaves create a thick, spongy mat. The farm dogs – Fluffy, Blommetjie and Lilli – trot along. Birdsong is everywhere.

“It’s a wonderful plant,” says Joubert. “I began researching it 15 years ago. It started with bamboo in our garden at home; we were so amazed by the speed of its growth that my daughter would measure it every day. Then I started reading up and realised how much nonsense has been written. I decided to get as many varieties as I could lay my hands on, plant them and track them myself.”

The focus of his attempts is the problem of polluted water. “The plant may offer a long-term solution to polluted water from coalmines and other enterprises. It can even be a solution for dysfunctional sewage plants.”

One hectare of bamboo was planted as a test site at Spruitdrift winery to monitor its effect on effluent. It is also part of research by the University of the Witwatersrand.

“Mining has three challenges: dust, water and heavy metals. The bamboo casts off leaves that trap the heavy metals; plus, the water can take up and process masses of water. Excess bamboo can be cut up and used as firewood or charcoal, which then makes it sustainable,” he says.

Joubert takes us back to the distillery, and after much talking it’s (finally!) time for tasting. We linger, slowly savouring his range as well as a few experiments he’s busy with. He introduces us to the pisco sour cocktail of Peru, and so the visit draws to a close as the evening stars begin to show.

The First Principles Distillery is open Monday to Saturday. Purchases can be made from its website – www.1stdistilleries.co.za – and deliveries are available countrywide.