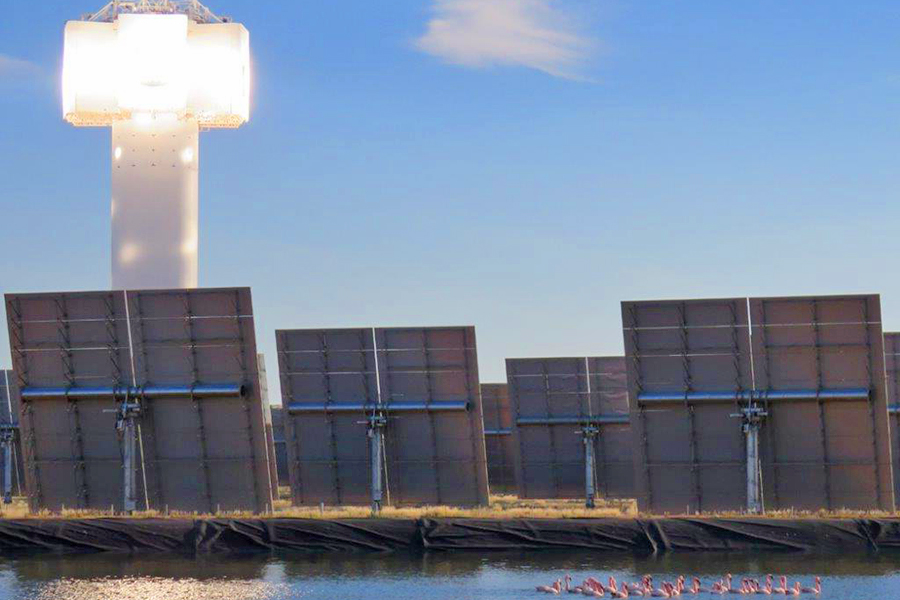 Van Heerden’s study was the first to focus on birdlife around the Khi Solar One facility near Upington in the Northern Cape. He received his MSc in Conservation Ecology from Stellenbosch University earlier this year.

Van Heerden’s fieldwork showed that the solar tower does have an impact on the typical bird populations found in the area throughout the year or seasonally, but less so than was expected. Various species make their home in and around the facility.

“When considering renewable energy options, one must always consider the pros and the cons for the environment and the impact it may have on the plants and animals,” Van Heerden explained the rationale behind his study.

Van Heerden took his lead from similar studies previously done in the USA and Spain. He did surveys on the solar tower site of 315 hectares, as well as on adjacent open veld. It stands amid typical Nama Karoo veld, in an area that receives around 150 mm of rain per year.

Throughout two seasons he recorded all bird species in sight:

The erection of the solar tower had an influence on the composition of bird species typically found in the area. Evaporation ponds attracted water birds such as flamingos which had not previously been found on the farm where it had been built. Wood- and shrubland species, as well as species usually found in urban areas, are nowadays found in greater numbers around the tower area than in the adjacent veld.

“Most birds collided against structures in the area where the freestanding heliostats are, and mostly along the lower quarter of these structures, roughly 3,2 m above the ground, involving the last two panels of each heliostat,” Van Heerden explained. “That’s at about the normal flight height of birds like red-headed finches and lark-like buntings.”

Most incidents occurred early in the morning or around sundown when birds are most active.

According to Van Heerden, the collisions possibly occurred when the heliostats stand at a 90-degree vertical position for a limited period during sunrise and after sunset. “It creates the illusion of an unbroken landscape and can completely confuse the birds,” he reasoned.

Most often it was migrating birds and species that hunt their prey in the air that were fatally singed during summer months by the so-called solar flux – a concentrated beam of sunlight that radiates from the heliostats past the central receiver and can reach temperatures up to 800 degrees Celsius.

“The bright light radiating from the mirrors of the towers can attract insects and, in the process, also insect-eating birds,” continued Van Heerden. “When something like a moving bird perhaps flies through the solar flux, it can be singed because the sunlight from the heliostats collides with an object and is converted into thermal energy.”

Most of the singeing incidents were recorded during a time that the heliostats were not in use, owing to power plant downtime. The heliostats stood in a standby position, which resulted in a kind of halo effect and singeing (solar flux) in the air above the tower.

About some media reports from the USA that claim that up to one bird per minute (which would amount to 28 000 birds per year) could die due to solar towers, Van Heerden said: “My findings do not support such claims. These are more likely made based on anecdotal evidence rather than good data.”

“Based on data from the current study, these claims seem exaggerated,” agrees Prof Karen Esler, one of van Heerden’s study leaders and chair of Stellenbosch University’s Department of Conservation Ecology and Entomology. “For perspective on the real impact of solar towers, one should compare bird fatalities around the site with those caused by other human activities in the area, such as farming, mining or the road network.”

A study conducted in 2014 estimated that between 98 million and 980 million birds die annually in the United States after colliding into buildings or windows. Up to 3,7 billion are caught by cats, and between 89 million and 340 million die because of traffic-related incidences.

“Some impact by solar towers on the environment is almost unavoidable, but can be minimized if managed right,” reasons Van Heerden.

He therefore recommended the following to operators of CPS facilities:

Khi One Solar lies approximately 18 kilometres south-west of Upington, where its 215-metre-high tower stands out across the landscape. Construction began in 2012, and it has been operational since February 2016. It can generate 50 MW of clean energy to around 45 000 households. To generate the same amount of energy, coal-burning power stations emit roughly 183 000 tons of carbon dioxide per year. Concentrating solar power (CSP) facilities constitute one of four ways in which solar power can currently be converted to electricity. Sunrays are focused onto large mirrors (known as heliostats) and are then reflected to a receiver as thermal energy. Here it is concentrated and converted to electrical energy by way of a conventional thermoelectric power cycle.