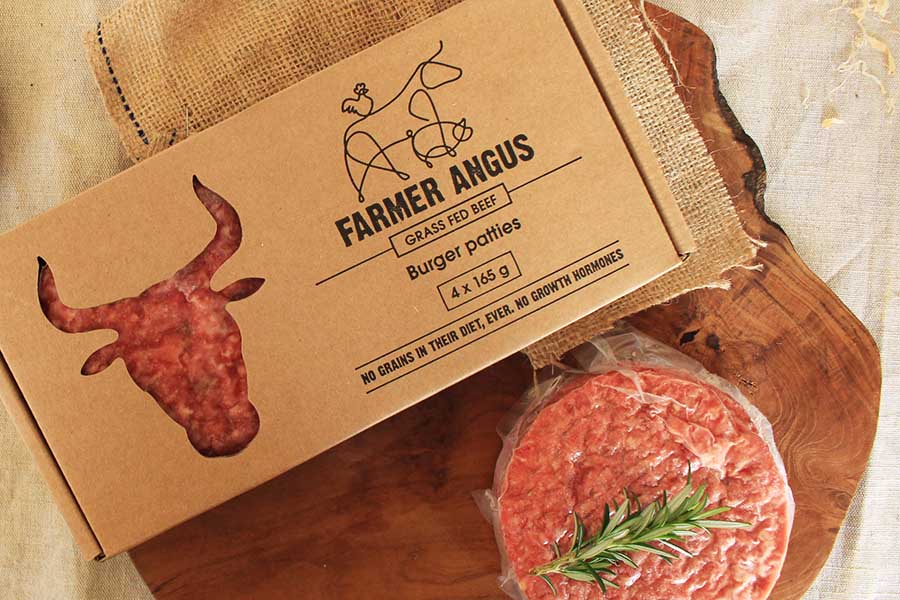 Farmer Angus grass fed beef burger patties can now be found in all Checkers stores nationwide. This move by Checkers gives the emerging regenerative agricultural movement the boost it needs to not only give customers access to beef that is nutrient dense, growth hormone and grain free, but that is also a major contributor to reversing climate change and promoting employment.

Over 99% of the beef sold in South Africa comes from feedlots where the cattle are fed grains and antibiotics. The cattle from Farmer Angus are raised on the Spier Wine Farm, in Stellenbosch by Angus McIntosh, where they practice rotational grazing. This method of raising livestock ensures that carbon increases in the soil. With more carbon in the soil, the farm is far more resilient against drought because the soil can retain more water. It also means there are a lot more nutrients necessary for healthy plant life.

Since 2013, Farmer Angus has been able to sell carbon credits for increasing the carbon of the soil in the pastures where his cattle graze. The last payout in 2020 resulted in his cattle herdsman receiving R100,000, which enabled him to buy his first house.

“There are so many benefits to farming the way we do. Everybody wins. Nature, animals, and people. Since we signed this deal with Checkers, we’ve been able to increase the number of cattle on our farm and in doing so employed four new staff members. The next soil carbon audit takes place in 2023 and with more cattle we expect to see bigger increases in the carbon.” says McIntosh.

For many consumers who shop according to price, what will excite them is that these grass fed burgers are being sold for less per kilogram than the grain fed, feedlot burgers currently in store making them not only good for your health and the environment but easy on the pocket.

“We have been working on this product offering with Checkers since late 2020 and in this time the team at Checkers have been very supportive especially Shaun Kerr, Renaldo Philips, Thandeka Mbhele and Arno Abeln.” Concludes McIntosh.

For more information go to www.farmerangus.co.za

Farmer Angus is one of two exclusively grass fed, pasture reared cattle farms found in the Western Cape. The 126 hectares of rolling green pastures is testament to Angus McIntosh’s dedication to grass and microbe farming. Here you won’t find cattle squashed together in feedlots eating GMO grain, or crowds of broiler chickens stuffed into tiny metal cages. No, farms like Farmer Angus practice a technique called regenerative agriculture, which values the life of the animals and the land they graze on. This form of artisanal livestock farming offers a protein source that is high in nutrition and free of any hormones, anti-biotics or chemicals.

In his journey from stockbroker to farmer, what started out as a way for Angus to live off the land to feed him and his family has ended up evolving into something much greater than he could ever have imagined. Growing up in a farming family he learnt from his father who owned a conventional cattle farm in Kwa-Zulu Natal. As a young boy he spent every school holiday barefoot, as he still does, eagerly helping his father and his Zulu farm workers carry out the daily farm duties.

Years later and after meeting his wife, Mariota, Angus pursued a lucrative career in London at one of the world’s biggest banks, Goldman Sachs. But as many South Africans who move abroad and start a family can attest to, is the strong calling to return home to offer their kids the chance to grow up close to nature under the African sun. So, it was only a matter of time before Angus and his young family returned to settle on a 126-hectare farm overlooking Spier Wine Estate. The farm is named Ezibusisweni, meaning the place of blessings in Zulu.

The family set out to build their first home, made entirely from clay. The plan was to create a home that could function entirely off the grid. At first he wanted to only farm the land as a way to provide his family with organic fruit and vegetables. However after reading Michael Pollan’s, the Omnivores Dilemma, he became inspired to start livestock farming and so in 2008, the Farmer Angus brand was born. They farm beef, pork and eggs. This was no easy feat though, with no formal training as a farmer Angus sought out the guidance of Christo Kok, a regenerative farmer, who mentored him for the first three years. Angus also devoted much of his time to studying permaculture. And so instead of following the conventional route his father took, Angus chose to apply biodynamic and regenerative farming practices and principles. He is dedicated to reviving the way farming used to be before the days of chemical fertilisers and herbicides like Glyphosate, anti-biotics and GMO.

Transformation of the ecology through regeneration

13 years ago, the soils on Spier lacked carbon and had very little signs of having healthy microbes, all essential for growing pastures rich in nutrients and ideal for cattle to graze on. Since then him and his team have worked hard to restore the soil. They’ve planted 126 hectares of multi-species and 24 000 trees and shrubs into the shelterbelts that surround the pastures. The fruits of their labour can be seen bursting with colour in every direction. From bright purple flowers on the September Bush that attracts bees to the deep red Crimson clover that fixes atmospheric Nitrogen into the soil. All the plants growing here serve to restore balance and regenerate the soil microbes. If more conventional farms began farming this way we’ll eventually see climate change reversing.

You are what you eat