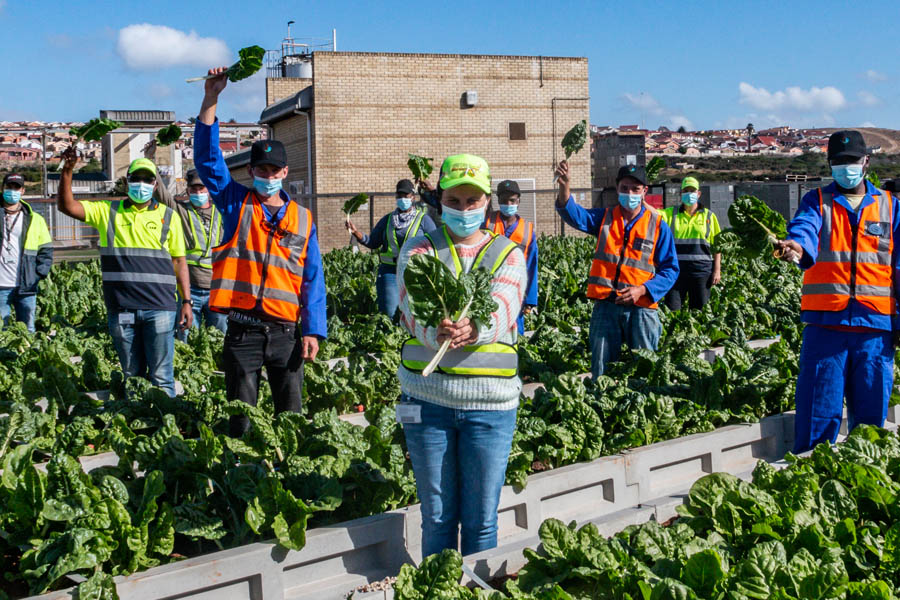 SAB, in collaboration with its partners, WWF South Africa and The Nature Resource Management Programme, has released approximately 2.5 billion litres of water into rivers and basins over the past 6 months through watershed investment. Today, SAB is proud to launch a one-of-its kind initiative, Project Popeye.

Just like the cartoon, hero and sailor man Popeye saved his beloved Olive Oyl with a healthy dose of spinach, so too is the South African Breweries (SAB) providing economic salvation to a local start-up Business near its Ibhayi Brewery in the Eastern Cape.

In what has become aptly known as Project Popeye, SAB, through its Ibhayi Brewery and the Project Eden Water Conservation Park (another SAB initiative that involved the construction of an artificial wetland), will be developing a commercial 2000m2 drip irrigation system, that will help a local business sustainably grow spinach in raised beds.

The Spinach beds only “use” roughly 10% of the water flowing through it, with 90% still available for reuse and this “polishing” of the water allows the brewery to recover more water through its water recycling plant. The losses from production normally become a waste management liability for a business and, all too frequently, society or the receiving environment. In SAB’s unique approach these nutrients can be transformed into a new agricultural product. This turns a potential loss into a sustainable business with a literally green product – true circularity in action.

To comprehend the depth of impact of Project Eden, and in its wake Project Popeye, one needs to travel back to 1998, when Mr Martin Davies of Rhodes University was involved in conceptualising the innovation. 10 years later, SAB made an initial investment of R1 million towards Project Eden and over the following 13 years, the University’s Prof. Cliff Jones from the Department of Ichthyology and Fisheries Science has led this research and development as a joint project with SAB. In collaboration with crop scientists from University of KwaZulu Natal and with financial support from the Water Research Commission (WRC), they developed and tested these innovations on experimental and pilot scales. “This is the triple helix at its best. SAB is leading the way for the sustainable use of our limited water resources while creating significant and tangible social benefits through the incorporation of the circular economy and water energy and food nexus principles,.” Mr Dhesigen Naidoo, CEO of WRC.

Director of Agricultural Development at SAB, Josh Hammann says, “Through Project Eden we were able to double our impact to reduce our internal water consumption, and can now provide a source of food and income to our local community.”

SAB has taken the economic impact of Project Popeye a step further, as it pledged to offer a capital investment to kick-start the agricultural ventures linked to Project Popeye together with local Business TaylorMade Water Solutions (TMWS).

“We will be supporting the operation of TMWS for the first 12 months through the construction and commercial establishment phase, and have offered additional technical and business coaching with the assistance of our Supplier Development Team, after which it will become self-sufficient,” says Hammann.

“What began as a project to treat our water has become so much more,” exclaims Hammann. “This is not only the first fully-green biological treatment system for a brewery in Africa, it is a platform for the continuation of research and development at Rhodes University, and a source of job creation worth R2 million of downstream value per year.”

The benefit around maximising the efficient use of natural resources is critical in a water scarce country like South Africa. “What we are demonstrating is the pairing of complementary processes and water users in order to maximise the local benefit of water. With this approach we can use the water to make beer, grow crops and then reuse what remains in our recycling plant for cleaning and utilities applications,” says Hammann.

Hammann is confident this highlights SAB’s continued commitment to sustainability. “These great strides fall perfectly in line with our greater corporate sustainability goals. It’s easy to say we are committed, but in Project Eden and Project Popeye, we have proven our commitment to the environment and our local communities, as we all seek to build a stronger and more sustainable South Africa.”