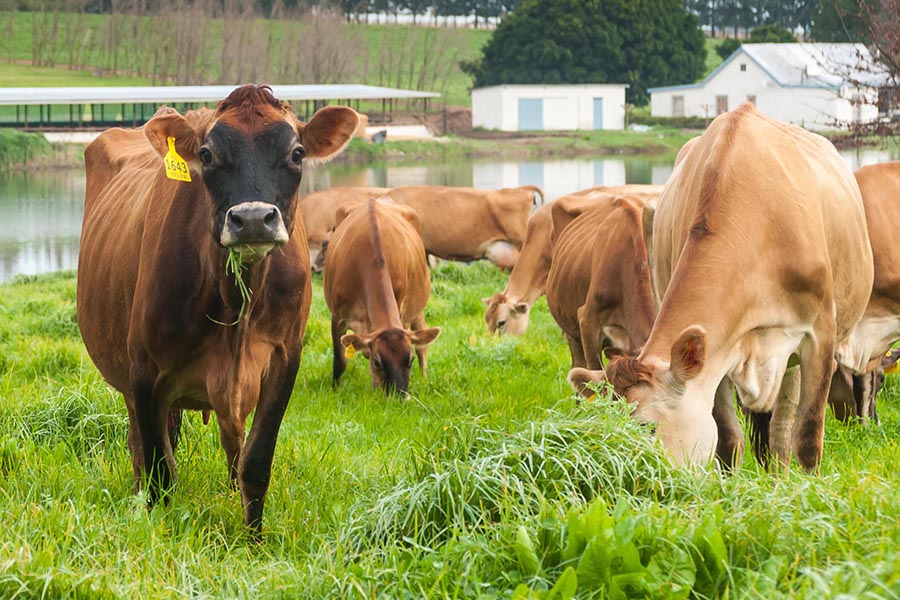 Dalewood Fromage is an artisanal farmstead cheesery with the goal to handcraft. Situated in the Cape Winelands, it’s a passion-driven family business owned by Petrina and Rob Visser and dedicated to producing quality cheese from the ground up. An authentic Estate product, produced from a single pasture-fed Jersey herd.

“Artisanal” meaning that the cheese is made by hand, using traditional tools and techniques. In most cases, an artisan cheese is the product of a single family, with the animals being raised and milked by the same people who make the cheese, known as farmstead cheese, or fermier in French. “From the starter culture to the source of the milk, the handling of the curd, and the care extended during maturation, cheese making is a work of art.”

Dalewood has a regenerative approach to farming and the rotationally grazed Jersey herd spends each day on green pastures, which are precisely managed, beginning with the gentle nurturing of the biological life in the soil. No artificial fertilizers, insecticides or week killers are used to boost these pastures.

Dalewood has focussed on diversifying its pasture species planted over the past six years, a journey largely inspired by Dr Christine Jones, a soil ecologist from Australia. It all starts with no tilling of the soil – no mechanical intervention. Lots of diversity of plants and photosynthesis. Lots of insects, spiders, fungi, which support life and give biological function to soil.

“The happy lifestyle of the cows is of the utmost importance to ensure the cheese produced from their milk is of the best possible quality. Cheese quality depends on the raw product. Growing our own pastures means we have control over the milk. We care about and focus on the well-being of our herd, says Rob Visser”. Rob’s dedication has resulted in various South African awards won including for Best Functional Herd Life, Best Herd Genetics, as well as for Model Herd. Dalewood’s cows are carefully bred for optimum health and the herd is recognised with stud status. The cows never receive growth or milk-production hormones or any unnecessary antibiotics.

Dalewood has been in the Visser family for over 60 years and used to be a strawberry farm with a small Jersey herd which provided milk for the local community. Rob pursued his passion for dairy farming and upgraded the genetics of the original Jersey herd. He always dreamed of making cheese… He is a graduate of Elsenburg College where he studied dairy technology and animal husbandry. After countless cheese tastings locally and in Europe and with sheer determination during two years of experimenting, a recipe for white mould cheese was formulated.

A dream then became a reality…

Rob and Petrina announced the launch of their flagship cheese, Wineland Camembert™ in 2000, inspired by the magic and romance of the vineyards. Hence the coming of age and officially celebrating their 21st Birthday this year.

In 2001 Dalewood’s Wineland Camembert™ won Best Cheese Overall at the National Cheese Festival, as well as a Qualité Award and a National Dairy Champion award at the then National Dairy Championships. That recognition gave them the courage to commit to cheese making. Petrina, being the radical person she is, encouraged Rob to take the plunge overnight; strawberry farming one day, cheese making the next. And so, the strawberry fields were replaced by lush pastures.

In 2004 Dalewood launched its first semi-hard cheese, Huguenot®. Inspired by a visit to the Haute-Savoie region in France, Rob was determined to create a cheese from a pasture-fed herd that would be uniquely South African and UNIQUELY DALEWOOD. This has achieved three Super Gold medals at the World Cheese Awards, as well as World Champion Jersey cheese in 2017-18.

Dalewood produces an extensive range of plain and exotic flavoured Bries, Camemberts, blue cheese, hard and semi-hard mature cheese. A selection of dairy products was launched during Lockdown 2020 which includes full cream Jersey milk, Feta, Stirred Yoghurt, butter and crème fraiche. All of these are available in The Cheesery Shop™ on the farm.

All products are suitable for vegetarians and contains no preservatives, flavourants or colourants.