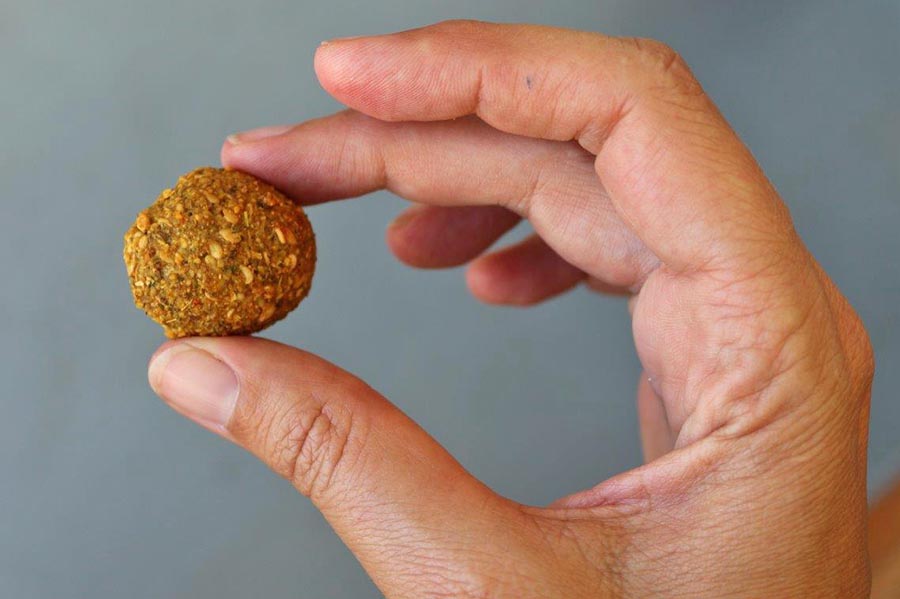 Stellenbosch University MSc student Carla de Beer, developed a dry premix using pigeon peas to make falafels (which is typically made from chickpeas) and investigated the health benefits of this legume.

Carla is on a mission to change perspectives about pigeon peas, one of the world’s many so-called “orphan crops”. She is doing it, quite literally, one falafel at a time, and has even written an online recipe book called “World Peas” containing recipes using pigeon peas as ingredients.

De Beer received a MSc in Plant Biotechnology from Stellenbosch University in April. She completed her research in the Faculty of AgriSciences’ Institute for Plant Biotechnology (IPB), under supervision of the IPB’s Dr Bianke Loedolff and its deputy director, Dr Shaun Peters.

De Beer hails from Ceres and currently works for an agricultural firm in Wellington. She hopes to see her dried premix with which to make the perfect pigeon pea falafel being sold in health shops and retailers one day.

Her research formed part of a much larger three-year project led by Dr Peters and funded by the National Research Foundation (NRF).  It has taken stock of the nutritional value of pigeon peas, and its possible use as a so-called “climate smart crop”.

Pigeon peas (Cajanus cajan) are a legume or so-called pulse crop that is eaten widely in Asia, the Caribbean and parts of Africa, where it is used as an ingredient in food as well as a forage or cover crop. It is not farmed commercially in South Africa.

“It’s called an orphan crop, because not much has yet been done in terms of research to understand which traits might be of importance to agriculture, food security and nutrition. Its genome was at least recently sequenced, and this has opened up new avenues for research,” notes Peters. “Through our research, we want to show that there’s more to this legume.”

Pigeon peas are sold locally in some shops as a flour or dried peas. All such stock is imported. “There’s so much more one can use it for than just in the traditional dhal or curries,” says De Beer, who likes cooking and prefers vegetarian dishes.

During the course of her studies, she used pigeon peas among others to make pastas (typically made from wheat), meatless patties spreads and snacking chips.

She decided to perfect a premix with which to make deep-fried balls of pigeon pea falafels after not being able to find such a recipe online. Falafels are often enjoyed in salads and wraps by especially vegetarians and are typically made using chickpeas or fava beans.

In her falafel recipe she used Middle Eastern flavours such as cumin, coriander, sesame and garlic. She was also inspired by food that she ate while visiting India in early 2020 as part of the Global Citizens Project of the Frederick van Zyl Slabbert Institute for Student Leadership Development at Stellenbosch University.

Some of the recipes she included in her recipe book were first tested on her housemates in Stellenbosch during lockdown. “The poor things. Our kitchen often suffered,” she remembers the experience. Once she was satisfied with her recipe, the Sensory Research Laboratory in the SU Department of Food Science helped with the necessary sensory analysis of her dish.

“I successfully showed that one is able to make a viable consumer product that could be sold in shops from pigeon peas, in the form of falafels,” she adds.

The IPB team’s “never give up” attitude helped De Beer to complete her study in two years, despite the COVID-19 pandemic. According to her supervisors, lots of fun was had along the way!
She did not just spend time in the kitchen, but also studied the nutritional value of the hulls around fresh pigeon peas. These are typically removed and discarded when the peas are dried or ground into flour. She found that the hulls are very high in both health-benefiting antioxidants and resistant starches, even more so than chickpeas.

She also delved into pigeon peas’ ability to store carbohydrates and starches, and the amount of health benefits that lines available from smallholder growers in South Africa hold. Some of the ones she sampled were harvested from the vegetable garden of Peters’ parents in Cape Town.
So-called total starch, which is released as glucose into the bloodstream, is typically made up of both resistant starch and soluble starch. The latter releases glucose faster, making it an unhealthy form of starch for humans.

De Beer found pigeon peas to be high in resistant starches. “It’s near impossible for our digestive system to process resistant starch, yet still we refer to it as a so-called ‘good’ starch. That’s because it improves our gut microbiome, which is important for an overall healthy system. Bacteria break it down into sugars as it moves through our guts, and then feed on it as a source of energy,” explains De Beer’s supervisor, Dr Bianke Loedolff.

Pigeon peas are a firm favourite in Asian countries such as India. “It’s not yet farmed with commercially in South Africa, but you will typically find it growing in home gardens or on smallholder farms in KwaZulu-Natal and Limpopo,” says Peters.

The varieties of pigeon pea which are grown in South Africa are thought to have arrived with Indian indentured labour in the 1800s. The plants appear to have adapted since to local climatic conditions and have evolved into genetically different landraces.

Peters reckons that because of its drought tolerance and high market value, South African farmers should start taking note of pigeon peas.

“These peas are an excellent source of nutrition for both humans and animals and could be used in rotational cropping systems because it helps to fix nitrogen into the soil.”

De Beer is one of five MSc students who has studied aspects around pigeon peas between 2019 and 2021 as part of an NRF funded project led by Peters and Loedolff. Seven honours students have also graduated successfully, with the programme’s first PhD student set to graduate at the end of 2022. They studied the agronomic traits, nutritional and genotypical profiles in terms of climate stress-resistance and human health and nutrition of South African pigeon pea landraces.
“Such information is a key first step toward establishing a baseline for future South African led breeding programs which could lead pigeon pea production In South Africa as a high value alternative crop model,” says Peters.