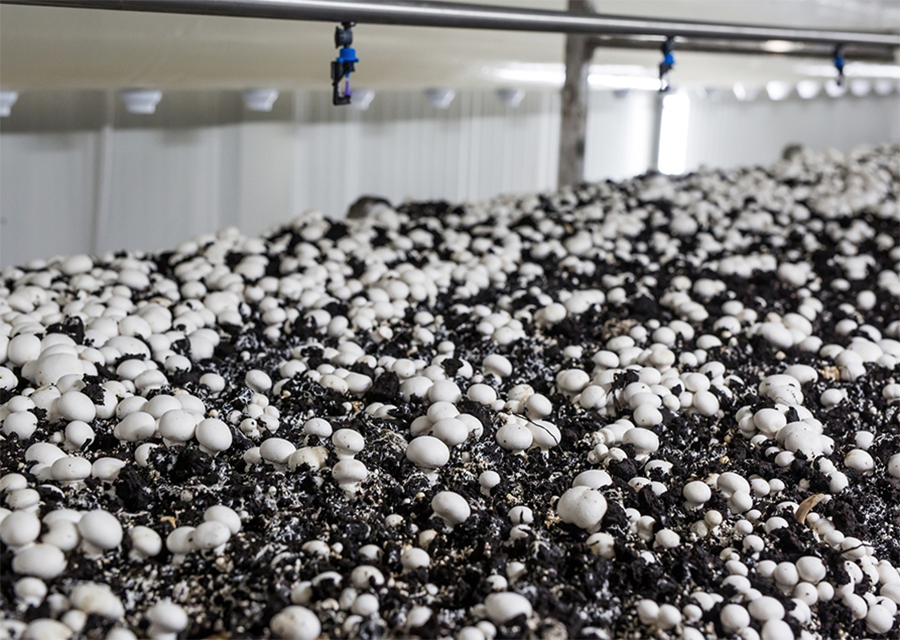 Mushroom farming is a key component of the agriculture industry as much of the waste products generated in other sectors of the industry are composted into a substrate in which mushrooms are grown.

“A big part of the mushroom composting process,” says Ross Richardson, the Chairperson of the South African Mushroom Farmers’ Association (SAMFA), “is the creation of a mushroom substrate that uses straw a waste product from wheat farming, as a base. The major benefit to the environment is that the thousands of kilos of straw used in the creation of the substrate was previously burnt causing smoke and air pollution.”

Freshly harvested or procured chicken litter and bedding materials from surrounding chicken farms are mixed into the wheat straw in a fixed proportion and in a set pattern to form a substrate, which is known as compost. This is an extremely important part of the success of mushroom farming because this forms the food for the upcoming mushroom crop. “It is therefore not surprising,” adds Richardson, “that every SAMFA member has developed a unique and customised mushroom substrate “recipe” and composting process to ensure the best results!”

Mushroom farms also provide a food source to pig, beef and sheep farms as the nutritious mushroom stems, a waste product from the mushroom harvest, can be mixed into their basic diet.

Taking advantage of the waste products of other agricultural enterprises is part of what makes mushrooms unique, as they compost and digest some of agriculture’s waste headaches, magically turning them into mushrooms.

One of the biggest environmental challenges facing the South African Mushroom Industry in 2007 was its reliance on locally sourced peat.

Peat is only found in wetland systems where it plays an important role because of its capacity to store water. It is believed that every cubic metre of peat holds just under a cubic metre of water and has the ability to release it slowly, as needed, into the ecosystem.

And that is exactly the critical role that this incredible natural resource plays in the mushroom growing process. Peat holds the water and only releases it into the fungi system as mushrooms grow. Mushrooms can’t be watered directly as they would blemish and be soft, so to keep mushrooms in perfect shape, this vital attribute of peat does the trick for the farmer.

But, despite peat being an essential component of mushroom farming, SAMFA members was faced with the fact that less than 1% of the world’s wetlands are found in the southern hemisphere where it had become a virtually non-renewable resource because of its incredibly slow growth habit.

“As an environmentally aware South African association, SAMFA felt that it needed to find a peat alternative.” explains Richardson. “The burden on our wetlands and water resources becomes ever heavier due to increasing water demands, development, industrial timber plantations, pollution and drying, owing to climate change. Our industry did not want to add to that burden. That is why SAMFA took the decision in 2007 to stop using local peat in mushroom production in our aim to conserve South Africa’s wetlands, one of South Africa’s most vulnerable eco-systems.”

The industry opted to source peat from the northern hemisphere where it is found in abundance. The ‘Global Peat Resources’ report points to the total area of peat lands in the Russian Federation alone at about 186-billion tons, second only to Canada’s peat resources in world terms.

“Our decision to look to the northern hemisphere for a solution is not the perfect answer in the long term, concludes Richardson, “but owing to the abundance of peat there, we believe that it is the only solution for our industry until a suitable local substitute is found. Today’s consumers are concerned about the preservation of the natural environment, as well as their personal health and wellbeing. That is why the South African mushroom industry is continuing to invest in research to deliver viable green, mushroom production alternatives.