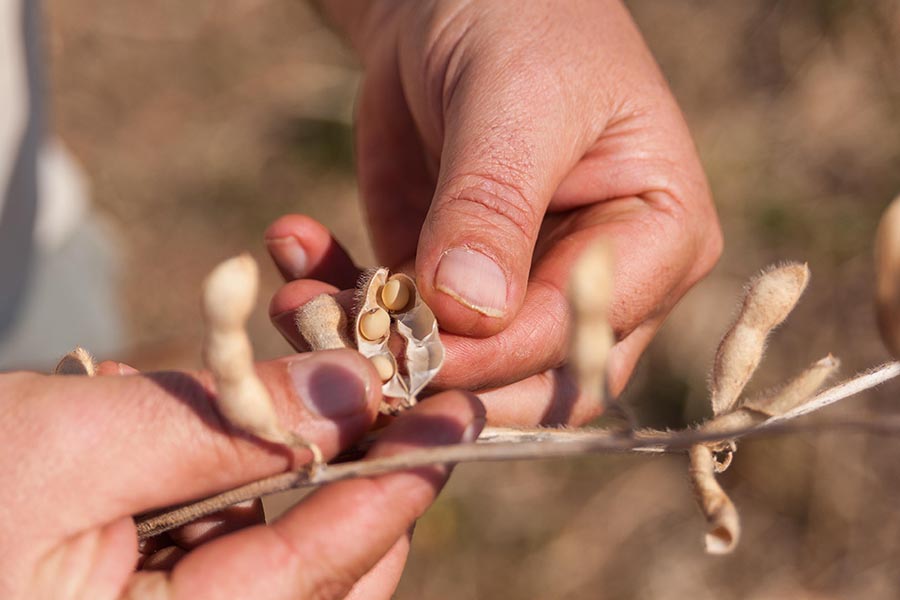 It’s never easy being a pioneer and often success for those who’ve earned it can come too late. But Jannie Cloete’s trailblazing work on the drying and roasting of soya beans for human consumption has already borne fruit. Whole-roasted soya beans are the cheapest source of commercially available protein in the world. The composition of amino acids is similar to any plant or animal protein source. They’re gluten and cholesterol-free.

We meet Jannie, co-owner of Oja! Farms outside Middelburg in the Mpumalanga highveld, at a fuel station. We’ll follow him to Leeuwpoortjie, the family farm since his great grandfather, Willem Bierman, bought it in 1950. He farms with his brother, Martin. Their youngest brother, Willem, is their neighbour. The fourth brother, who doesn’t farm, lives in Hartebeespoort Dam.

Halfway to the bean processing plant, Jannie stops beside an open field. He shows us what the plant looks like and where tiny soya beans nestle in their pods. The harvest was completed about three weeks before our visit. He stops a little further on. To me the dull, blackened plants appear dead and I ask whether the drought hit them as hard as the rest of the country. He plucks off an ear and strips away the husk to reveal a beautiful, fat cob.

The brothers’ father began farming soya beans as a rotation crop some 12 years ago. Martin followed suit. The land planted to maize is used for soya beans the following season. Soya returns nitrogen to the soil and improves the ground quality in a natural way. The farm now has an annual turnover of maize and soya beans. Jannie says initially everyone used fertilizer on their land and simply planted the same crop year after year. Back then, compost wasn’t nearly the quality that it is today and the soil wasn’t particularly healthy. In the 1980s they harvested 4,5 tons of maize per hectare, but now, with updated techniques, they’re hoping to harvest nine tons per hectare this year.

The two farms in the Leeuwfontein stable comprise 550ha. Jannie says to be profitable and efficient, you must farm between 500 and 1 000ha; the bigger your farm is, the more diversity you can accommodate and the better your chances of success. “Farming has changed: my grandfather could make a good living from 50ha. Now we farm scientifically, with soil samples; some have drones; and, all kinds of tests to improve our yields.” He says during his father’s time in the 1980s, a ton of maize sold for precisely the same as the cost of 2 200 litres of diesel. “That’s a ratio of 1:1. That same diesel costs R32 000 today and one ton of maize brings in R2 500. And that’s just one example; we’re not even talking about the cost of fertilizer, seed and labour,” he says.

Of the 550ha, 300ha is arable land with 200ha used for Bonsmaras for the commercial market. The cattle eat the residue of soya and maize left on the land, fertilize the soil and are sold for their meat. For most farmers on the highveld, maize and cattle were the ideal combination, but they’ve increasingly been experimenting with other crops.

He says soya beans need more or less the same amount of attention and labour as maize. The same sowing machine and harvester are used, with just another head; everything is farmed dryland and the same soils suit both. “Insurance for soya beans is much more expensive because it isn’t as resistant to hail as maize is; the sprays are also pricier, but what we earn per ton is considerably higher than maize,” he says.

One aspect that made a substantial difference in yield per hectare was their decision some eight years ago to stop tilling. Maize and soya residues are left in the field; the cattle graze for a while and fertilize the soil and then sowing proceeds. The soil quality has improved to such an extent that the past few years have seen a rise from two tons per hectare to three tons per hectare. For maize, it rose from six to 8,2 tons last year and hopefully 9 tons per hectare in the harvest currently underway [at the time of writing].

He says his younger brother, Willem, visited Argentina with friends and was introduced to conservation agriculture. Today, most farmers in the region are doing it, with the results usually evident after five years. He says since they ceased disturbing the soil with ploughs, there has been a return of wild animals such as snakes, mice, servals, and guinea fowl. It’s as if the animals have sensed a correction in balance.

About two years ago, the Cloete brothers decided to diversify the soya beans and examine how they might be useful for human consumption. They planted three varieties, which were specifically tested for local climate and soil conditions – Pannar 1521, Pannar 1623 and this year also Don Mario 8.6. “Next year we’ll try something new again, as the tests improve, and new varieties become available. The brothers’ soya is all GMO, which ensures higher yields.

The idea to use whole-bean soya for human consumption is of course nothing new, he says. The Chinese have done it since 1700 BC and use soya beans in their daily diet, from tofu to soya milk. But in the West, it has always been used as cattle feed and plant oil. Jannie shows us a model that displays how plant oils are used in turn for products like fire-fighting foam, soap, and paint. Soya beans. During WW2, soya beans came into their own when a giant shortage of plant oils arose. America couldn’t import from China, so it began planting its own.

The soya bean is 18% oil, which can be extruded. The residue, so-called soya flour, is used as cattle feed. It’s from this residue that the Americans made soya mince, when the price of meat rose sharply in the 1960s. It was presented as a meat replacement, looked like mince, and had to taste like mince. “That’s unfortunately most people’s experience of soya.”

A raw soya bean isn’t fit for human consumption because it contains antitrypsin. The only way to make it palatable is through heating. Soya beans comprise 36% protein versus conventional meat’s 43%, which makes it a logical alternative as a source of nutrition.

Jannie explains: “But it’s here that the consumer must change perspective. Soya beans are not a replacement for meat; it’s a replacement for other dry beans, because it has such high nutritional value. “We contacted food scientist Louis Verhoef, and he planted the seed with us to use it like the Chinese – the whole bean – in order to enjoy its full benefits.”

Jannie and Martin and their uncle Louis visited China to learn. There, they purchased a roasting oven custom-fit for South African conditions and installed it in a new processing plant on the farm. “Now we roast the beans to get rid of the antitrypsin. The process also changes three molecules in the bean and gives it a delicious nutty taste. We don’t remove the husks, so you have 17% fibre, 36% protein as well as a gluten and cholesterol-free product.

“Now that we’re comparing it with other dry beans, it’s an entirely different situation,” he says. They now offer two options to the public: soya nuts as snacks, which are available in five flavours – salt-and-vinegar, beer, chakalaka, regular and fruit chutney – and dry-roasted soya beans that can be used in stews and soups, or ground-up for shakes or sauces (to stretch meat), or in breakfast cereal, energy bars and even in spreads.

There are two reasons one can be excited about soya for human consumption: South Africa’s middle income bracket is growing poorer and it’s a good alternative at 10% the price of meat; and, first-world countries are rapidly seeking alternatives to red meat because the demand has led to the ballooning of red meat production’s carbon footprint.

At one point, Jannie and Martin’s path crossed with that of recipe developer and food-lover, Riëtte Strydom. She began creating recipes to promote the use of the beans in everyday dishes. A short video on Oja! Farms’ website shows how the beans are soaked in boiling water for 20 minutes, followed by discarding the water, adding stock – chicken, vegetable or beef – and cooking in a pressure cooker or on the stove. In his office, Jannie proceeds to show us how simple it all is. He pulps the beans in a standard kitchen blender, along with stock and a fried onion; then, he dishes it out and hands us each a bowl: a delicious, nutritious soup that can be made for 84c per cup.

“It’s the ideal solution for feeding schemes, retirement homes, orphanages, hospitals – anywhere large volumes of food with high nutritional value and protein are required,” he says. Soya beans that have already been steeped in water and cooked will keep for three weeks in the fridge to be used when needed as a base for soups, stews and even bobotie. Just 100g dry beans produces 250g of swollen beans and from this 500g of soup can be made when stock is added.

While we savour the soup, Jannie dishes up a Mexican mix: a delicious side-dish at a braai or in a wrap with paprika, garlic, green pepper, and chilli. Riëtte Strydom has subsequently joined the Oja! Farms team and she and Jannie travel the country doing food demonstrations. Riëtte also does recipe development that is culture and taste specific. And so, the circle of people who’ve come to understand the benefits of soya beans for human consumption grows bigger.

But the perception around soya is what keeps Jannie puzzled. He really wants to contribute to resolving the food crisis in Africa and elsewhere in the world using dry-roasted, whole-bean soya’s high protein. “People are slow to take to the idea. They hit brakes when they hear the word soya and it’s all thanks to that terrible soya mince of years ago.

“I suppose pioneer work is the hardest,” he declares when we say our goodbyes. Somehow it feels as if the worst is behind us: the establishment of a processing plant, the roasting oven, the recipe development. It’s done. Now, people need to get their teeth into the idea – and the beans.