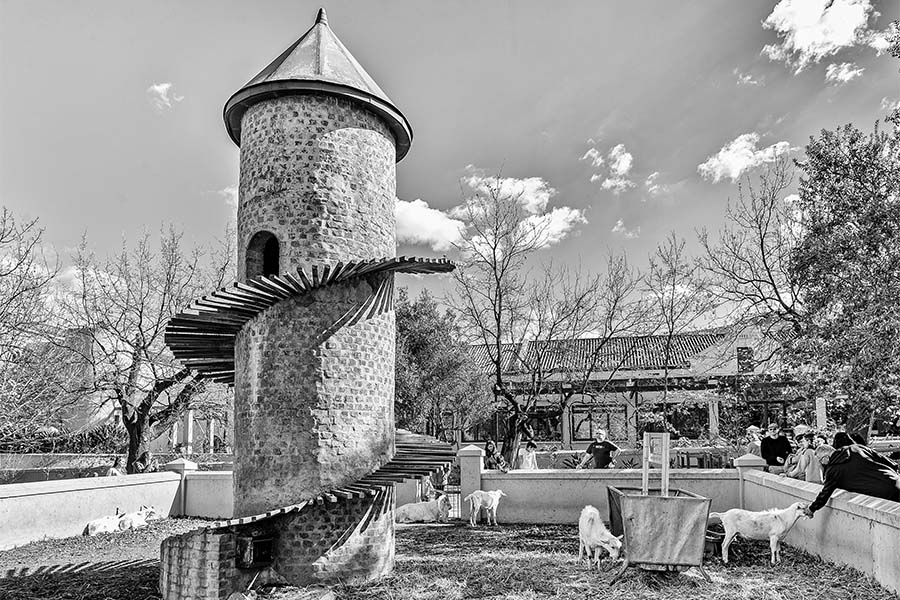 Charles Back is a trailblazer in the wine industry, an agri-tourism pioneer and a respected philanthropist. He is overseas with our visit to Fairview, but it is as informative to get to know the man and the realisation of his vision through the eyes of his colleagues.

Donald Mouton, the Fairview viticulturist and general manager, meets us at the Goatshed Restaurant. “We started diversifying many years ago, long before it became a catch phrase in agriculture. If not, we would have been belly-up long ago,” says Donald. When he started at Fairview in 1999, the farm was already well-known for its wine, cheese and goats’ towers. In 1999 Fairview had less than 50 fulltime staff members and today 500 people work on the different farms, restaurant, tasting room, cheese factory, bakery, bottling plant and in administration. “I have a huge admiration for Charles,” Donald says. “We are not talking here about people as resources. Diesel is a resource, because you use it. A worker is someone in which you invest.” For this reason, the farm decided not to implement mechanisation at the cost of workers.

Winemaker Anthony de Jager, who started at Fairview in 1996, chats to us in passing.

“Charles has always been ahead of his time with the planting of cultivars and he in 1996 already planted viognier in South Africa,” says Anthony. Not that it was an easy road, as their challenges with Estraño is witness to – a red wine blend of the Spanish tempranillo, grenache and carigna varieties. The initial vines were bought locally, but unfortunately it turned out to be tinta amarilla. Today Donald and Anthony can smile about the incident, although it took years to correct that mistake. “From the initial concept until we had a good wine in our bottles, took fifteen years,” says Anthony. It was only after the second harvest that they realised that it was not tempranillo. “The wine was really bad,” says Anthony. “Tinta amarilla is a port wine cultivar and even port people do not like it!”

We drive across the road with Donald to Fairview’s cheese factory making some of the country’s most innovating cheese products under the watchful eyes of cheesemakers Louis Lourens and Maryke Truter. The plant produces more than thirty cheese varieties and is intensively busy with product development for their own label, as well as those of Woolworths, for who Fairview develops exclusive ranges. “We are persued by all the audits, but it is good to be able to measure up to high standards,” is Donald’s view.

The production manager, Bruce Rowboth, meets us at the entrance, and with our blue hair nets, boots and white plastic over coats, the tour can start. Bruce is one of four cheesemakers and has been with Fairview for thirteen years. “You cannot study the art of cheesemaking in South Africa,” says Bruce, who started his career by loading cheese trucks at a large cheese producer. He accidentally started making cheese when the factory had a shortage of labour.

Personally, I think “as happy as a child in a sweet shop” can be replaced with “as happy as an adult in a cheese factory”. Our first stop is the production room where the team is halfway through the four-day process to change pure jersey milk into feta cheese. Approximately 11 000 litres of milk make 1,8 tonnes of feta cheese. Bruce puts his hand in a bath of soft, coagulated milk and pulls it out. “If the texture starts to look like a chicken breast, it is ready to be cut.” We jump to the side when a worker comes around to skilfully cut the feta diagonally into blocks with a wire cutter. I taste the warm, waddling block and it has an almost-sweet taste, pure milky. After the cheese has been turned and cut several times, it is soaked in a salt suspension for three to four days. Then it is cut by hand into slices, packaged airtight and distributed. Cheese from Fairview is not sold in tubs with salt water. Bruce thinks they are the anbit-brine brigade, because “we sell cheese to consumers, not saltwater.”

We visit the first of several drying rooms where large wheels of Camembert and Brie is maturing, before they are cut into triangular wedges and packaged. I try in vain to capture the beauty of layer upon layer of neatly stacked cheeses on my cellular phone. The picture just does not look the same without the smell of cheese peacefully ripening. In the next drying room Bruce shows us the Chevre Roux especially produced for Woolworths. A round goats’ milk cheese gets a doughnut hole in the centre and is sprinkled with soluble ash. The cheese matures until the grey mildew grows through the grey ash. It looks exceptional and I make a note to find this cheese on the shelves in Woolworths.

Drying rooms ensures that the mildew grow under the right conditions to produce white mildew matured cheeses such as Camembert, Brie and Roydon. The cheeses spend one to two days in the drying rooms. “When a cheese has a chalky spot in the middle, it is not ripe yet,” explains Bruce.

After that we move on to a warmer maturation room where the mildew is really finding proper form. Cheese is a living product. According to Bruce Fairview is the only cheese plant that invests on large scale in maturation rooms. The cheese spends nine days in the rooms and every cheese is turned twice daily by hand. “Here you really need eyes at the back of your head,” Bruce says about the logistics of cheese maturation. Apart from the large volume ranges where 10 000 litres of milk are processed very day, there is also a smaller production room where lower volume ranges are produced. Here old techniques, needing more manual labour, is used like for instance the production of cream cheese drained in cloth bags. The cheese factory employs 110 workers and although automation is an option, Fairview prefers to do as much as possible manually.

We meet Janro van Niekerk, a former Boland and Griqua rugby player who started farming on Fairview in 2014, at the cheese factory. Fairview has always been synonymous with goats, cheese and wine, but he agricultural roots of the farm go much deeper and is more diverse than I and other visitors might realise. Janro looks after the animals and arable land. “The best thing about farming is to see the results. Every day is a new challenge,” Janro says. Fairview has 350 heads of cattle, consisting mostly of a Red Angus herd. Everything living or growing on Fairview provides products for the restaurant and the tasting room. It was Charles’ vision to follow a field to fork philosophy. “Here everything is part of a bigger circle,” Janro says with reference to the animals, their feed and the waste at the cheese factory.

Whey residue from the cheese factory are transported to the animals in small mobile tanks. Apart from the cattle, the farm also houses 250 pigs, 200 goats, 1 000 sheep and 600 laying hens. The farm also produces fodder which includes protein rich brewers’ grain and whey to help feed the animals in the dryer summer months. We stop at the free ranging pigs and it is noticeable that they approach us and do not run away in a panicked state. The Saanen goats almost smile properly with curiosity when they see us walk into their shed. Two hundred ewes are milked twice daily and produce on average four litres of milk per ewe per day. “And no, we do not even have to put up the guard rails, they run to the milking shed on their own,” Janro says.

Like Donald and Bruce, Janro refers with great admiration to Charles and his vision as farmer and businessman. Fairview is undoubtfully successful, but not at the cost of animal or nature. Janro summarises it beautifully: “Everything here is happy.” Before we hit the road, chef SJ Nel – who participated in the third series of Kokkedoor – spoils us with a beetroot and goats milk cheese salad, followed by juicy pork loin and a pasta with beef fillet strips in a rich Mediterranean sauce. Fresh farm produce served in rich, tasty, scrumptious portions. It is impossible to leave Fairview without buying cheese. And a bottle of Extraño, to enable me to toast the Back family. And especially Charles, whose heart is as big as his vision.

Wheat straw and mango peels could be used for renewable food packagingPackaging material capable of releasing antioxidants into food in response to storage conditions have...March 16, 2021

Ban on wine sales: stop the absurdityA total ban on alcohol is the dullest instrument the government possibly could have...January 22, 2021

Farmer Angus expands partnership with Checkers to include...