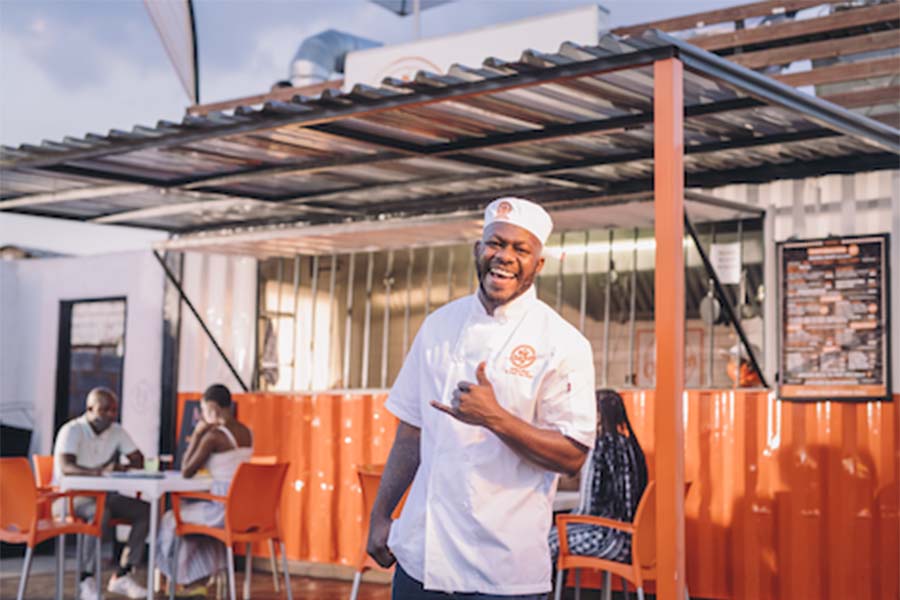 When the COVID-19 hard lockdown closed small-business owner Letlhogonolo Motseeng’s Soweto chicken restaurant after just six months of operation, he gave away all his stock to stop it from spoiling, gave up his flat and sold much of his furniture. Homeless, he slept in his car for several weeks to keep his business running and continue paying his staff.

When it got to the point where he also had to sell his car, it was “a pain”, he says – “but I had to rescue the business”.

Motseeng knows something about resilience and entrepreneurship. He started selling sweets at school at the age of 11 to help support his family; after matric, he sold chicken feet and gizzards outside shebeens.

When he came up with his Moja Chicken restaurant concept – centred around eateries set up in moveable shipping containers with rooftops, targeting the township market – years later, he based it on what he knew.

“When I was growing up, the only meat we ever ate was chicken. My late grandmother owned chickens and it was my responsibility to feed them. Also, chicken is the most-consumed meat product in South Africa. I saw a gap there,” he says.

According to a COVID-19 impact report published in late 2020 by Finfind and key national partners, an inability to operate was one of the factors forcing the closure of almost 43% of 1 489 South African SMMEs surveyed during the first five months of the pandemic.

But giving up was never an option for Motseeng. He had, after all, quit his comfortable nine-to-five job to use the capital for his new enterprise. “I had to come up with a solution … I had to be more creative to address the market and serve its needs,” he recalls.

So, once eateries were allowed to open for takeaways, he introduced a food-delivery and -collection model into the business and stepped up his marketing efforts.

He initially struggled to cope with just one delivery bike but persevered, buying two more bikes and eventually renting a couple more.

His perseverance paid off.

Motseeng’s concept, vision and spirit of innovation earned his business a place among 12 SMMEs supported by insurer Hollard’s Big Ads for Small Business initiative that aims to help small, medium and micro-enterprises thrive, to their own benefit and that of their communities and the broader economy.

His franchises have grown from an initial two (in Soweto and Mpumalanga) to 10 by January this year, with more stores planned for De Aar in the Northern Cape and East London in the Eastern Cape. Potential franchisees have also been identified in Kuruman, Northern Cape.

Hollard has provided him with an accountant and legal support – which he describes as “invaluable”. His business is also getting a brand-new website via a Hollard supplier.

Motseeng has had the opportunity to meet with the top leadership of Nando’s and received two hours of valuable mentorship to help him with his business challenges.

His social media following has increased dramatically over the past year.

He has also signed an exciting new deal with a large food retail group to supply his Moja Chicken-branded sauces and spices, and there’s more to come. “We have seen more traffic coming our way, and an increase in sales,” he says.

The Moja Chicken case study has also been included as an elective module in the Gordon Institute of Business Science Master of Business Administration degree.

One of the things that drives him is empowering young people, Motseeng stresses. “Every time I open a new store, I’m excited about creating jobs.”

He believes the sky’s the limit – he is now also venturing out into a new field, launching a new sneaker business in August 2022, and has started taking pre-orders.